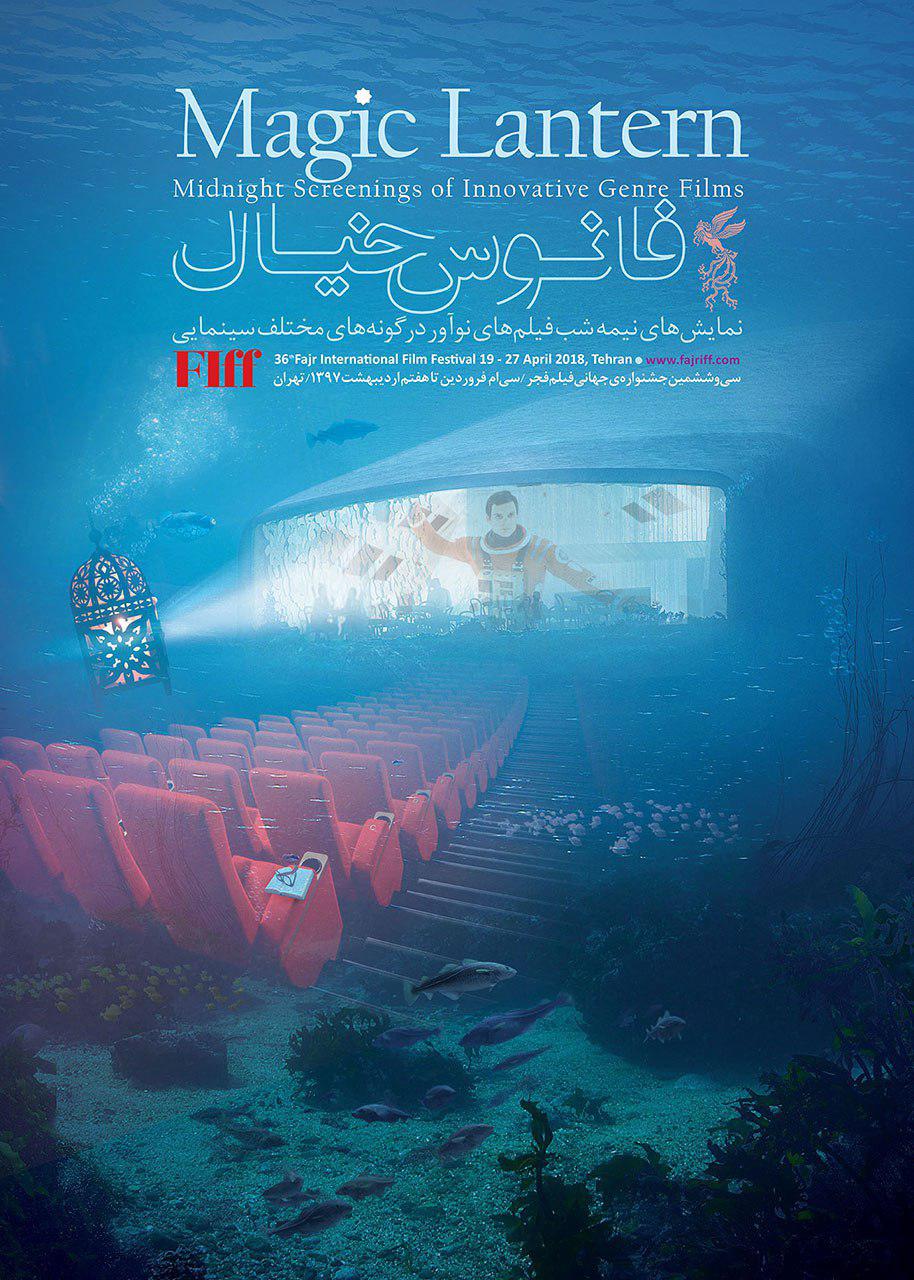 The 2018 Fajr International Film Festival has just unveiled the full lineup for its magic Lantern program.

As expected, this year’s lineup is stacked with the latest work from an array of national and international auteurs – four titles from Iran and nine title from the United Kingdom, Italy, Azerbaijan, France, Japan, and Hungary.

You can see the entire lineup below:

When seventeen years old single mother, Isla Corrie witnesses the murder of a police informant she becomes a pawn in a dangerous game. Manipulated by an ambitious prosecutor and a corrupt police detective, Isla must find a way to protect her son before a killer realizes there’s a new witness.

Paul is a world-renowned magician, author and expert on the art of deception. In 2013, after a successful career in television, he released the award-winning short The Magic Box before producing and directing the feature documentary Our Magic. In 2015 he convinced his cast and crew to join him for Con Men and produced and directed a full-length feature for less than £5000 Isolani is his second scripted feature.

Mrs. Géquil is a shy teacher despised by her colleagues and students. On a stormy night, while conducting an experiment in her lab, she is struck by lightning and faints. When she wakes up, she feels decidedly different… and the appearance of the dangerous Mrs. Hyde soon impacts on Mrs. Géquil’s teaching methods.

A glass in free fall. Have you ever thought if it is possible to calculate into how many pieces it can break into? After numerous experiments, a team of researchers succeeds in doing just this apparently impossible task. Attracted to their experiment, a mysterious professor invites the scientists in his isolated mansion to know more about their studies. However, when they arrive, they are not greeted by their host but they are faced with a strange model of the mansion, in which some absolutely normal but incredible actions are acted. The researchers will soon understand to be involved in a new experiment in which they’ll have to play a very different role than usual: that of the glass in free fall.

Giordano Giulivi was born in Rome on August 17, 1974. After his education in humanities, his passion for audiovisual techniques led him to work as editor at Italian National Television. Always attracted by the imaginary and the mysterious, interpreted in a philosophical and scientific way, as shown by his passion for astronomy, he found in making movies his mean of expression, conceiving and telling stories that reflect his interests and fantasies. He has therefore dedicated himself to the cinema taking care of all the aspects related to the realization of a film, seen as a unitary and integrated activity, including the creation of the story, writing the script down to the smallest details, directing and final editing.

The Third Murder is the new film from internationally-acclaimed director Kore-eda Hirokazu – the powerfully moving story of a man struggling to find the truth while questioning his own faith in the law.

Born 1962 in Tokyo, Japan, after graduating from Waseda University in 1987, Kore-eda joined TV Man Union where he directed several prizewinning documentary programs. In 2014, he launched his production company BUN-BUKU. In 2001, Distance was selected in Official Competition at the Cannes Film Festival, and the star of his fourth work Nobody Knows (2004), Yagira Yuya, garnered much attention as the youngest person ever to receive the Cannes Film Festival’s Best Actor Award. In 2012, he made his TV series directorial debut with Going Home. Like Father, Like Son (2013), winner of the Jury Prize at the Cannes Film Festival, received the audience awards at San Sebastian.

In the small Sicilian village of Pietrammare, the election of new mayor is approaching. The town has been led for many years by the crooked Gaetano Patanè who is ready to do every trick in the book to stay in power.

Salvatore Ficarra and Valentino Picone started in 1993 as a comedy trio with Salvatore Borrello, performing together on stage as Chiamata Urbana Urgente. In 1998, after Borrello had left the trio the pair began to use their surnames: Ficarra & Picone. In 2000, they made Chiedimi Se Sono Felice and two years later their acting debut in Natistanchi.

Between 1993 and 1999, one man robbed 29 financial institutions in Budapest. Banks, post offices and even travel agencies all fell victim to his crime spree. The police had no leads and no hope of finding him during the six-year stint. The only clue left behind at the crime scenes was the distinct aroma of whiskey. The media christened him the Whiskey Bandit.

Born in 1973 in Los Angeles, Nimród Antal started his film studies at the Film Workshop of the Pasadena Art Center in 1991. Kontroll was awarded the 23rd Prix de la Jeunesse presented in the Un Certain Regard section of the 2004 Cannes Film Festival. Kontroll is Nimród Antal’s first full-length feature film. Following international premiere in Cannes it was screened at over 50 international film festivals and got 11 prizes including the Special Prize of the Jury in Sochi, Best Director and Best Cinematography in Copenhagen, the Audience Award in Warsaw and the Gold Hugo in Chicago.

To try and overcome a lifetime of bitterness and resentment, an old lady decides to climb a mountain in Scotland.

Simon Hunter was born in 1969; After graduating from film school in 1993, he went on to write and direct a handful of short films – one of which, Wired. In 2016, Simon completed his third feature film, his passion project, EDIE which tells the tale of an old lady who heads to Scotland to climb a mountain. The movie was selected for the Edinburgh International Film Festival in June 2016. The movie has subsequently played in film festivals around the world, including Santa Barbara, Dublin, Victoria and HOF.

Born in 1975 in France, Samuel Jouy began his acting career onstage. On TV, he co-starred in well-known multi season series such as Ainsi Soient-Ils. In cinema, he appeared in French Blood by Diastéme and will star in Burn Out by Yann Gozlan. Jouy wrote the script for his directorial debut Sparring, which stars Mathieu Kassovitz.

A recurring dream on his birthday makes a guy to return to a house with his wife and friends, where he was forbidden to go for years. He finds out about a series of mysterious events in this place which is somehow related to his grandfather.

Elvin Abdulla was born in 1990 in Shaki Azerbaijan. He is the manager of Dream Big Film Company. Khennas is his 3rd feature film.

Ghodratollah Samadi is a sly man who wishes to be a parliament representative. He lobbies with parties but they do not take him seriously. After a while, an unexpected incident makes him famous. As a result, a reformist party decides to fill its election list with him. Ghodrat enters the party and the election. After disqualification by Guardian Council, he becomes furious and his illegal activities bring along a lot of troubles.

Kamal Tabriza was born in 1959 in Tehran and graduated from the Cinema and Theatre Department of Art University. In 1979, he started his career with directing, screenwriting, cinematography and editing short films. He was education director of Cinema Azad and he attends a number of film schools as an instructor.

To prove his innocence, and to reclaim his peace, Jahanbakhsh embarks on a long journey which turns everyone’s life upside down.

Mohammad Ali Bashe Ahangar, born in 1962, graduated in Movie Directing from Tehran University of Art. He started his career with writing, directing and acting, and made a number of short 16 mm movies and documentaries. He worked as a director assistant in 1997 on Rage Flames (Hamidreza Ashtianipour) and co-wrote the script for Fly Over the Rooftops with Mohammadreza Gohari.

A criminal loses his leg in an accident. He falls in love with a girl and trouble begins.

Abolhasan Davoodi born in 1955 Neyshabur, Iran, graduated from the School of Television and Sociology of Shahid Beheshti University. He co-wrote his first script, Paeizan (Rasoul Sadr Ameli) with Farid Mostafavi, as film critic, contributed to a number of publications. He is the founder of Arta Film and  was the chairman of Iran’s House of Cinema board of directors.

A group of old friends go to an inherited house. Trouble begins when uninvited guests arrive.

Abbas Nezam Doost was born in 1980 in Rudbar. He worked as assistant director on different projects such as Arghavan and A Romantic Robbery. Ordinary Life of Mr. Mozafari and Oxidant are among his short films.