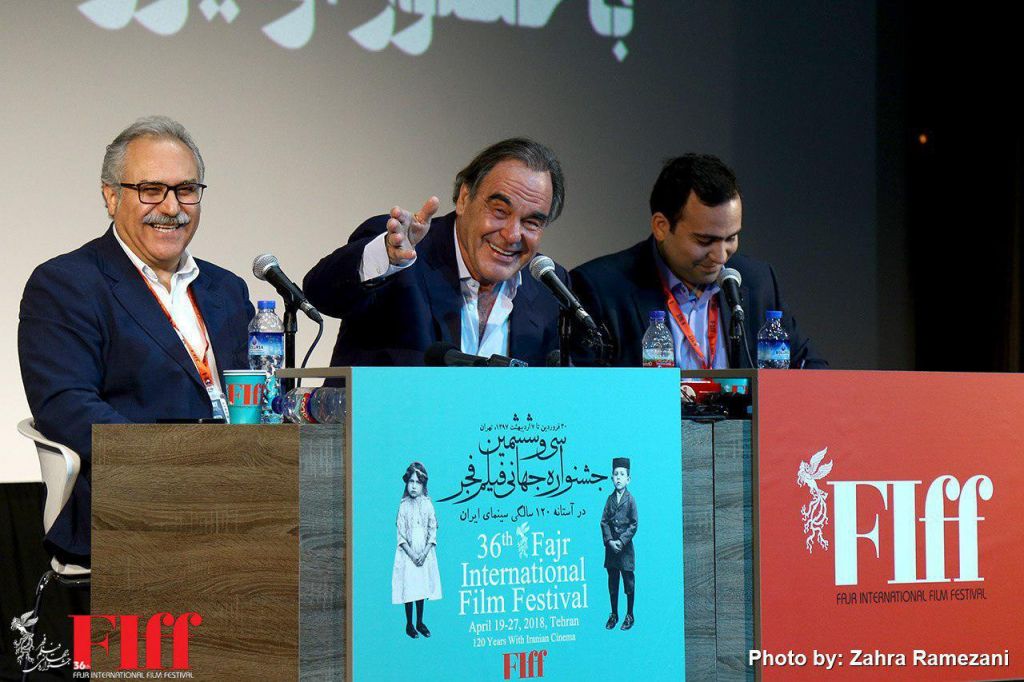 According to the Press Office of Fajr, three-time Oscar winner Oliver Stone spoke out forcefully against President Donald Trump and US foreign policy in the Middle East. The special guest of FIFF also lashed out at French President Emmanuel Macron and looked to Saudi Arabia ‘as one of the major destabilisers of the entire Middle East.’

The highlights of Stone’s speech:

-The “creative destruction” of US foreign policy in the Middle East;

-Likening Trump to “Beelzebub,” a name sometimes given to the devil;

-Demonstrating a solid knowledge of regional politics as well as Persian history;

-Drawing parallels to his films like Alexander and W;

-Lambasting the Trump and Macron for calling for a revision of the Iran nuclear deal;

-Calling Macron a young man without much sense of history or memory of the great traditions of France;

-And comparing Macron who sought a return to imperialism to French President Chirac who stood up to Bush on the invasion of Iraq.

National security Trumps artistic freedom in every country, the US as well as in the Middle East. You can’t make a film critical of US foreign policy. My film W was very difficult to finance. There was no interest in making Snowden, which was turned down by all the studios. I couldn’t get a dime from them. The film was ill-promoted and when it was finally released in the US, it came out too late.

W was my dramatization of the role of the US and its allies in the Middle East, along with their goals of attaining oil, money and resources at any cost. I love the movie, it’s a satire. The war in Iraq was a proxy war and US foreign policy since 2001 is aimed at regime change, no matter how disastrous the invasion of Iraq was. We made a mess out of Iraq, Syria, Libya, but it doesn’t matter to the American public. It’s okay to wreck the Middle East, because it’s the neo-conservative policy of creative destruction. It doesn’t matter who is president Bush, Obama or Trump, the US will break any treaty in its interests.

Saudi Arabia is a major destabilizer in the Mideast. They are also creatively destructive. It’s a very good idea to make a film about ISIS, but the world is very political and there are many blocking forces and controversies, for example in the US, Saudi Arabia and Israel. It would be hard to make it honestly. I have come under heavy fire from the conservative, hard-line Israeli press for my trip to Iran. It’s totally false, a ridiculous story that I had planned to make a film in 2007 about then-president Mahmoud Ahmadinejad, only to be rebuffed.

We have to remember that, at my age, I’ve seen thousands of films from all countries. So please don’t ask me remember all the names of the films that I’ve seen. But I have to admire Iranian cinema. In this trip I’ve seen about ten movies and I’m looking for another this afternoon again and another one perhaps by the time I have to go back to my hotel room, so I’m catching up not only with Iranian cinema but also central Asian cinema, Iraqi and I include Russian and German too.

Last year in Pusan we fell in love with an Iranian film and we gave it a co-prize for the best film in the competition, it called Blockage. The other film was a Korean film. But Blockage surprised me and as I said, it was honest in its revelation of corruption inside Tehran. It was about municipal problems, everyday problems, tickets, Police and you saw through this film, 17 or 15 people, how they sucked into this mess. How did they get anything fit. This in life, is everywhere, it happens in New York City or Tehran.

Iran, because of its history, It’s a 2500 years on the map. It’s a big cultural centre of the world, important. We know this for Darius and Cyrus and Achaemenid Empire going back in the culture. I’ve always been interested in Iran but practically I’ve been very busy. My son Sean came here a few years ago and told me that he had a wonderful time and encouraged me to come, and I was looking forward. Now It’s a right opportunity in the right time. It’s been interesting for me that coming to a film festival I’m relaxed more than ever. I don’t have to present a film but I don’t have to go to the process of review, so I’m enjoying sketching up with what’s been going on in the movies and I learn a lot.

I don’t consider myself journalist. I consider myself dramatist. Sometimes when I take a break from making films as a dramatist I was tired, and going back to documentary refreshes me, keeps me in touch with people who are real, whether it is Castro when I say real in the sense of real leaders Chavez I interviewed and Mr Putin, and among others it is very good to go back to reality because when you live in this Los Angeles climate too much you mistouch with history and reality. I have no plan at this time to do an Iranian politician or leader, I saw a false story the other day printed in somewhere about my asking Mr Ahmadinejad for an interview in 2007 or 6. And let me make this very clear, I have never asked him for an interview. I don’t know where the story came from but this is part of a problem that surfaces with me asking. They have always ask me Winston Churchill or whoever it is in the news. Believe me, I am less ambitious than that. What happens falls when it falls I might interview if the opportunity and its reasons and the energy arises that’s possible that I would interview an Iranian leader.

I don’t remember being exactly specific about India or Iran when I was shown that quote I objected to and I have asked to clarify from the festival point of view. I was talking in general about festival movies and boring movies across the world I have been to many countries and the problem is in festival there are great movies but the majority can be very specific and end up that’s what I was referring to – boring. I was being very honest in the master class with young people who were students of film make it exiting films make it exciting as possible. I remember I said the formula is tension tension tension. My solution was you don’t have to be agree with me. Some filmmakers don’t consider the tension. Be in agreement with me, it’s not a universal point.

A giant question and it is a giant subject. It deserves a documentary because it’s too big to make a movie. I would say that I made a movie in 2008 called W about how George W. Bush become a president. The movie chart goes from Yale University student to the president of US and it ends in 2004. We close the movie in 2004 because he invaded Iraq and it was a disaster. That’s why we ended the movie with him lost. In that movie there is an important scene where the national security discuss the United States. They talk about the goals of America at the end of the scene. You will see Dick Cheney goes to a map shows the Middle East he believed part of the American Empire, and what he talks about our goals around the world and he says the prize oil money resources are in Eurasia and points out to Iran and said we are going to Baghdad the real man is going to Baghdad and then one of the characters says what is your exit strategy sir? And Cheney looked at him and says there is no exit. The new conservatives call it creative destruction, that is the terminology, a disgusting policy which is ruining millions of lives.

Are you talking about US? Oh you talk about Iran because you hardly can talk about US because National Security has trumpeted artistic freedom and the truth is you cannot make a film critiquing United States foreign policy and frankly this the fate of my movie W’s. As an example, W was financed very difficult financing and the fate of the box office but it was not great to promote a film like W nor Snowden or to make Snowden when I made Snowden I could not get a dime in America.

I would like to make a comment just for you, for France. I was particularly shocked last night to come back to the hotel room, and see on Iranian Television, your President, Macron standing alongside President Trump calling for a revision on the Iran deal. I couldn’t believe it, and I remember very well President Chirac with great pride when he said no to George Bush when he wanted to invade Iraq. Now to see this young man who doesn’t have much of a sense of history or memory of the great traditions of France. We have to remember that Mr. Macron seems to want to like Mr. Sarkozy to stand alongside Americans as a sign of French power. This is a return to the colonialism and imperialism of the old France. This is what President Charles de Gaulle swore off with the Algerian War of 1958 – 9 when he called it quits. France has to learn that it cannot be imperialist. Mr. Macron has to learn not to be an imperialist. For me to see him join Mr. Trump in this declaration was very depressing and I think the memory of the better side of France comes to me with Mr. Chirac.

I think after 100 years, you have to realize that they hardly watch subtitles at all. French cinema hasn’t penetrated America, why should Iranian Cinema? Why should Chinese Cinema? America remains a very isolated, enormous country, onto itself. very proud of itself and very proud of its movies. So I don’t see much home in giving America an international sensibility, unless people travel abroad and have passports and a lot of people don’t have passports. I think the majority don’t. But let’s keep hoping for international commerce to lead to trade and international communication.

Things are changing with television and certainly Netflix. Netflix will make money as long as they can. What they will do is that they will exploit Iranian filmmakers if they can get the licenses probably they can’t get it here. What they will do is that they will buy locally, produce locally and make money locally. And that’s what they do everywhere in the world. So, they will make the movies but I don’t know if the movies will translate and touch other people’s countries. What happens occasionally is that British television series will go to America and sometimes they take a Swedish or a northern European series and they translate it to an American thing but very rarely.

The Fair festival, which unfolds side by side with the Iranian film market April 19-April 27, is the longest-running film event in the Middle East. More than a hundred films from around the world are screening. Other festival guests include actors Franco Nero, Jean-Pierre Leaud and Italian composer Nicola Piovani.