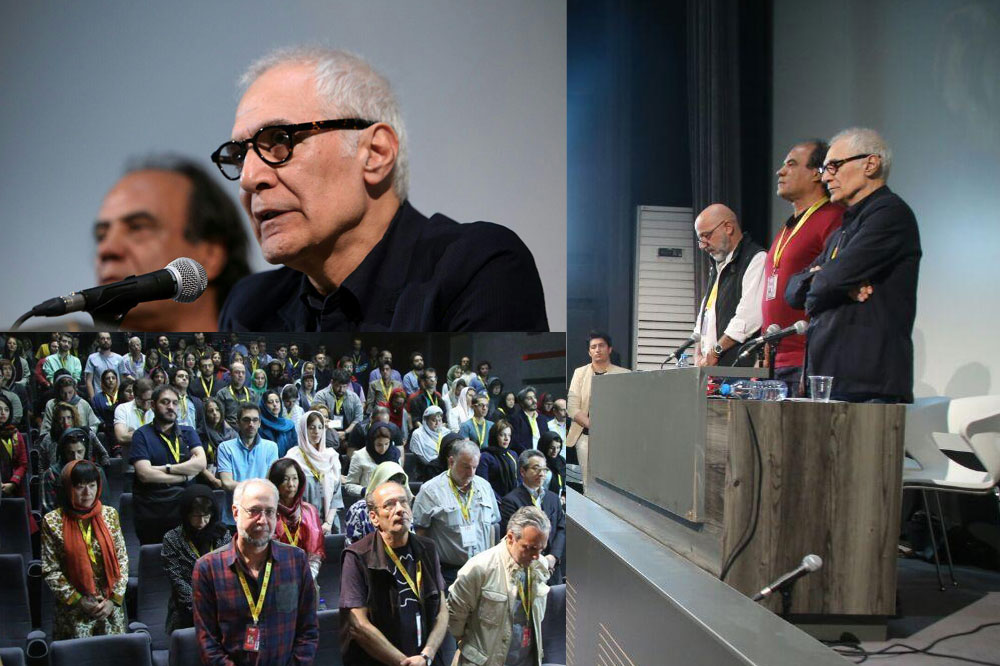 The second day of the program commemorating Abbas Kiarostami was attended by the film crew of The Wind Will Take Us and Tickets. Also in attendance were Mahmoud Kalari, Mohammad Reza Delpak, and Seifollah Samadian.

Addressing the crowd, and after the screening of Take Me Home, program manager Samadian said the 15-minute movie is in fact not a movie at all. Kiarostami edited the film while in hospital. The short film has a vision that overrides all the other elements in it, such as graphics and photography.

Also speaking via video messaging, Babak Karimi talked about his experience with Kiarostami while filming Tickets, as well as characteristics of his cinema. He said Kiarostami always went against the rules, always.

Also speaking, Samadian said, “A lot has been said about Kiarostami. But to understand him, it is necessary to adjust your world view with his. I worked with him in two films as director of photography. I also helped him in five others to find location, photography, and select the negative. What I learned all this time was not just the art of cinematography. It was also about life itself.”

The cinematographer of The Wind Will Take Us added, “What is important about him is his characteristics. I continue to explore new aspects of his character. He ‘Was Like No Other’ might seem like cliché today, but this was so true about him. He always went against the rules. For instance, he kept in mind the panorama of the film but at the same time he never looked for the best and the most beautiful picture. He had his own rules which made him special. Many think Kiarostami was for the realist cinema. But he always hated reality movies. In 1997, he told Le Figaro that cinema in any form is a big lie. Our art is to make it somehow believable for our audiences. In other words, using a set of lies to get to the bottom of the truth.

Also speaking, Kalari said, “Kiarostami had his own working style. For instance, we never knew for how long we were going to shoot a scene. When shooting Tickets, he was extremely annoyed because there was a two-day holiday break. After two weeks of shooting we were told we couldn’t continue, because it was Ken Loach’s turn to shoot the next episode. We still had to shoot the final scene. H was not ready to let go of it. He talked to Ken Loach and convinced him to use his schedule to shoot the final scene.

Another speaker Mohammad Reza Delpak talked about his experience with Kiarostami in set design. He said, “I came to know him on the location of Taste of Cherry. Our relationship continued until Like Someone in Love. It was an exceptional affiliation. He had faith in natural sound and mise en scene, or the arrangement of the scenery. I learned the art of mise en scène and natural sound recording from him. He taught me how to replace a scene with sound when it’s not possible to shoot it. He believed in the culture and geography of sound. He was a master in this. We should be able to use the art of sound to tell the difference between a Japanese, Iranian and Turkish market.

Fajr Festival began a week-long program on Saturday to commemorate the late Iranian filmmaker Abbas Kiarostami. The ongoing program includes an exhibition of works by the A-list filmmaker in the form of photos and posters at the Charsou Cineplex. Prominent Iranian and foreign directors, film critics and buffs discuss the different aspects of his personality and work. They include directors such as Victor Erice (Spain), Fridrik Thor Fridriksson (Iceland), Semih Kaplanoglu (Turkey), and Geoff Andrew (Britain).

Iran’s top film event has been reconfigured to bring more international movies and film industry executives into the country. The new international offshoot features films from around the globe, screening alongside Iranian titles, plus master classes in Talent Campus being taught by A-list directors, producers, and critics. President over by Reza Mirkarimi, the festival is currently underway in Tehran until Friday, 28 April.