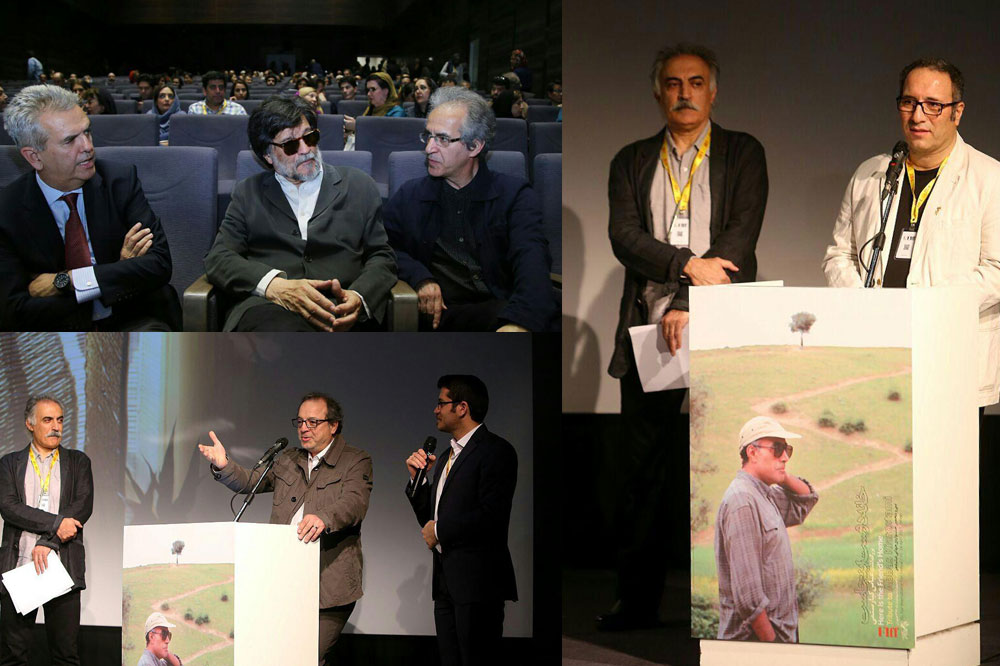 The ongoing program includes an exhibition of works by the A-list filmmaker in the form of photos, posters, and cartoons at the Charsou Cineplex. Prominent Iranian and foreign A-list directors, film critics and film buffs discussed the different aspects of Kiarostami’s personality and work. They included directors such as Victor Erice (Spain), Fridrik Thor Fridriksson (Iceland), Semih Kaplanoglu (Turkey), and Geoff Andrew (Britain).

Addressing the guests, film review programs manager and festival spokesperson Alireza Shojanouri said, “I never thought one day I will be standing here talking about commemoration of Kiarostami. I always accompanied him in his foreign festival trips. His first festival film was Where Is the Friend’s House? I loved it. I visited him many times when he was being treated in hospital. But he never stopped working. He had zest for life and he always wanted us to talk about this part of his life, which is to admire life.”

Also speaking, Festival Director Seyyed Reza Mirkarimi said, “When we started the work on this year’s festival, Kiarostami was sick. We had hoped that he would soon recover. So we decided to pay tribute to him and his work this year. We even designed the festival poster with him. But he is no longer among us. He taught us many things; that there are wonderful things happening everywhere; that there are only few boring things around us. He taught us how to see great meanings behind small events, and how to discover them.”

Also speaking, program manager Seifollah Samadian said, “We are here to celebrate a celebrated filmmaker. So we should be all happy and cheerful talking about him. It was difficult for us to invite each and every one of his colleagues and fans. But I can still see great Iranian and international artists and filmmakers who are here to honor his life and work. Kiarostami kept our pride intact overseas. We are here to listen to those who have come from overseas to pay tribute to him. That’s the least we could do.”

He went on to explain that on the second day, Sunday, four of Kiarostami’s colleagues will also talk about Kiarostami’s work and life. On the third day there will be a workshop to discuss his directing and filmmaking methods. His students from Cuba, Colombia, and Spain will screen and discuss their films during the extended programs.

Also speaking via video messaging, his son Ahmad Kiarostami said, “Ten years ago my father held a filmmaking workshop in Morocco. It was a humble experience for us. Quite the contrary, when an A-list director like Martin Scorsese holds a workshop, it turns out to be a red carpet event. I discussed this with my father. He said Scorsese makes blockbuster movies so it is natural for him to have a grand entrance. I am a simple man and I make simple movies. I cannot be like him and he cannot be like me. We are successful because we are both faithful to the reality. This is the greatest lesson I ever learned from my father.”

Also speaking, Victor Erice said, “I am proud to be standing here beside you. I am in fact excited. This commemoration happens in a place Kiarostami was born, a country he loved. It is hard for me to talk about him. We know each other through our films. When I first saw the movie Close Up, I was so impressed. It was then that I realized a new visionary had been born in cinema.”

He added, “Kiarostami made it big in a place like Europe when everyone else was too tired to make a good movie. He covered all the chapters in movie making. At that time, it was like filmmakers were making movies for each other to see. The same was true for writers and painters. But I couldn’t see these signs in him. He had the group concept within him. He forced us to see the real world. He forced us to change our perspective in life. He taught us to see the world differently. He taught us a real picture is only born when innocence is amalgamated with wisdom.”

Also speaking, Fridrik Thor Fridriksson (Iceland) said, “Hollywood makes movies to waste time. Kiarostami made films from the smallest things in the world. His culture is international, never limited to Iran’s borders. He had both local and international cultures. We are all indebted to him. We don’t know much about Iraq and Afghanistan which the US invaded. It is the duty of filmmakers to tell us more about their countries, but in a creative and realistic way. There are raw materials everywhere for us to pick and make them into great films. Kiarostami’s absence is a great loss for the world of cinema and any honest filmmaker.