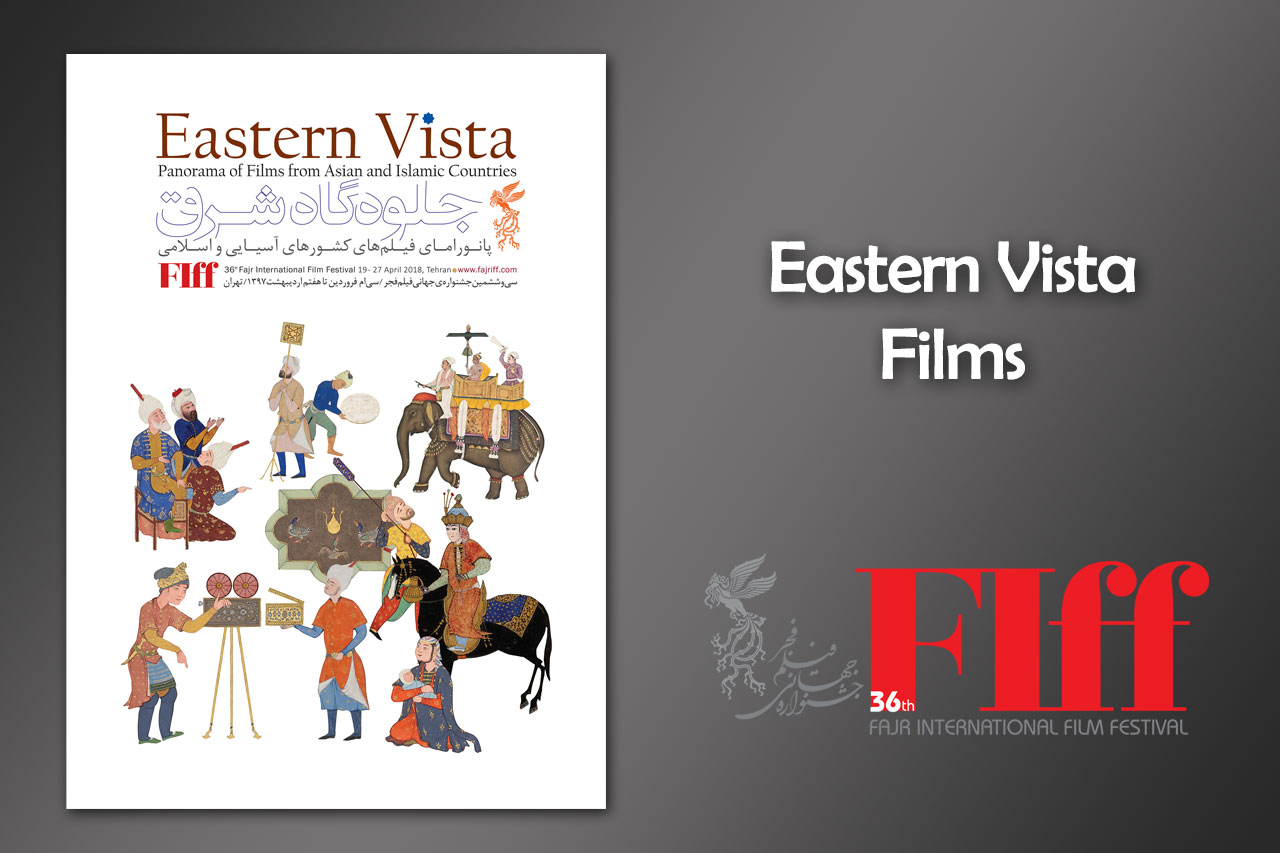 The 2018 Fajr International Film Festival has announced the names of feature-length films that will compete in its Eastern Vista program: Panorama of Films from Asian and Islamic Countries.

At a presser in Tehran on Wednesday, Festival Director Reza Mirkarimi said 12 foreign films and 3 Iranian feature films will be shown in this section.

Here are all the feature-length titles screening:

The story begins with Vince Kang, a reporter in Beijing, having to go back to his hometown to report a crested ibis, one of the national treasures found unexpectedly. During the process of pursuit and hide of the crested ibis, everyone’s interest is revealed and the scars, both mental and physical are rip up. In addition, the environmental pollution, an aftermath from China’s industrial development, is brought into the spotlight. The story, from the perspective of a returnee, reveals the living conditions of rural China and exposes the dilemma of humanity.

Qiao Liang is a professor and postgraduate tutor of directing department from Beijing Film Academy. Major TV series: Mother Will Marry, How to Save You My Love, Endless Love in Tokyo. Major films: Fly, Keelung, My Own Private Deutschland, and Crested Ibis. Awarded by various film festivals many times.

Moc is a fisherman in Vietnam raising his son Ca in harmony with the land. Ca has a little yellow chick for a friend and enjoys running after airplanes in the sky every day, calling them birds from the city. When Ca falls ill, Moc must make the harrowing journey to the city with his son for treatment.

Dung Dinh Luong was born in 1973 and graduated with Masters of Art in Cinematography from Hanoi Academy of Movie and Theatre. Boat man (2007), one of his short films, received the Excellent Film Award in 29th Tokyo International Film Festival. Red Happiness was chosen to receive the Merit Award by Vietnam Cinema Association, and screened at the Clermont-Ferrand International Short Film Festival in (2004). His debut film Father and Son won numerous international awards. The film went to represent Vietnam in the Foreign-Language category of the 90th Oscars.

After 12 Gabil returns home to his orchard of venerable pomegranate trees.

Ilgar Najaf was born in March 2nd, 1975 in Ararat region of Armenian Republic (USSR). After the conflict in 1988, his family was expelled from Armenia. In 1997, he graduated from Azerbaijan State University of Arts in directing. In 2004, he established the film studio ButaFilm where he produced and directed a number of movies.

Baghdad, 2006.  Sara goes to Baghdad station with sinister intentions for its reopening ceremony. As she braces to commit an unthinkable act, her plans are drastically altered by an unwanted and awkward encounter with Salam, a self-assured and flirtatious salesman.

Mohamed Al-Daradji studied in Baghdad and Hilversum, Netherlands before travelling to the UK to complete his Masters Degrees in Cinematography and Directing at the Northern Film School in Leeds. In 2003, following the invasion of Iraq, Mohamed returned to his native country to make his first feature film, Ahlaam. The film screened at over 125 international festivals, receiving 22 awards, as well as Academy Award and Golden Globe consideration, establishing Mohamed as a revered international filmmaker. Since the success of Ahlaam, Mohamed has written and directed 2 further feature films, including the multi-award winning and critically acclaimed, Son of Babylon (2010). His work also includes 3 long form documentaries as well as the establishment of the Iraq Independent Film Center; a film production and training institution based in Baghdad. The Journey is Mohamed’s third feature, and had the world premiere at Toronto 2017.

After being deposed in a coup, the president of a newly independent country flees to mountains with a group of supporters confident enough he will return to power.

George Ovashvili (b. 1963, Mtskheta, Georgia, USSR) graduated from the Georgian State Institute of Cinema and Theater (1996) and from the New York Film Academy at Universal Studios in Hollywood (2006). He is a director of dramas and documentaries that he often produces. He has made a number of memorable shorts: Eye Level (Zgvis donidan… / Mzeris doneze…) received an award at the Berlinale and the Odense, both 2005. In 2009, KVIFF’s East of the West Competition presented his feature debut The Other Bank (Gagma Napiri, 2008); the film won awards and was nominated for European Discovery of the Year by the European Film Academy. His second picture Corn Island (Simindis Kundzuli, 2014) won the Crystal Globe for Best Film at KVIFF and was shortlisted for an Academy Award.

A historical drama, based on true events which took place in the twentieth century in Kazakhstan. The main characters are faced with the necessity to live within the conditions of a historic experiment, at a time when society in general tries to erase its history to build a happy future.

Bolat Kalymbetov is a Kazakh famous actor, film director, and scriptwriter. Born in 1955 in Narynkol, Almaty region. Graduated from Acting department of Kazakh State Conservatoire named after Kurmangazy in 1977 and directing department of Almaty State theatre Institute in 1989. Member of the Filmmakers Union since 1984. Got the award as an Honored Arts worker of Kazakhstan in 1998. His filmography as an actor consists of more than 50 films. He is a professor of Acting and Directing workshops in the Art Academy.

In a small hill town, a series of coincidences related to a mysterious robbery brings four people together. As these seemingly mundane events become increasingly dramatic, the four find themselves at a crossroad, where they face impending consequences. Set in the tiny Himalayan state of Sikkim, Ralang Road is a local multi-narrative, with a fragmented style of storytelling to understand cultural immigration, and lifestyles in a complex social setup.

Karma Takapa (b. Sikkim state, India) graduated from the Film and Television Institute of India, Pune, and in journalism from the Indian Institute of Mass Communication in New Delhi. He is the creator of shorts and docs that experiment with narrative approaches and investigate a variety of locations (including his hometown in Sikkim). His two short features Ordinary Times (Thutse Kyuma, 2013) and No Where Here (Yahin Kahin Nahin, 2014) were selected for the program of the Goa IFF, the first of these winning a Special Jury Prize at the SiGNS film fest. He and two other directors wrote and directed the feature-length story showcase An Illusion of My Mind (Mor Mann Ke Bharam, 2015), awarded a Special Jury Prize two years ago at the MAMI Mumbai Film Festival. Ralang Road is his first directorial debut.

Five Palestinians are trapped inside a small apartment during the Israeli war on Gaza Strip. Political and social divisions among themselves, and religious intolerance, and the lack of acceptance of the other despite the difference, are factors that go beyond their solidarity and weaken their resistance against the Israeli occupation.

During the Iraqi invasion of Kuwait, invading forces siege a group of Kuwaiti youths, who have only two choices: either surrender or die for their homeland.

Ramadan Khasrouh is director, producer, music and visual artist from Kuwait, co-founder of the Lulua Productions. His directorial debut was Lover of the Earth in 2015.

A man with his nephew and a woman with her five-year-old sister, coming from a different political background in Syria, are left in the destroyed city of Homs during the war in 2014. They struggle under the fire and wonder how their love will save them from death.

An online suicide club members decide to end their lives together. However, every time they try, they find themselves back in time when they meet up.

The Mongolian people have a long tradition of wrestling, racing horses and archery. The  story focuses on the horse racing tradition.

Ordakli’s father who is a technician at the Tabriz Railway station is forced to move to Tehran to treat his wife who is suffering from terminal illness. Once in Tehran, he registers his son at a renowned school without thinking about the tragic consequences he will be facing because of his name.

Behrouz Gharibpour was born in Sanandaj in 1950. He is an Iranian theatre director and pioneer of traditional Persian puppet theatre. He studied theatre at Tehran University and at Dramatic Arts Academy in Rome (Silvio D’Amico). He founded Tehran and Esfahan puppet theatre centers and changed the Tehran’s slaughterhouse into a Cultural Centre. He has also directed films and TV series. Ordakli is his third feature film.

The story is about a group of people whose city is like a small patio.

Maryam Bahrololumi was born in 1985, Tehran, Iran. She has a degree in Arts and studied cinema at the Istanbul University of Turkey. She is an active Member of Tehran Association of Film Assistant Directors of The Iranian Alliance of Motion Picture Guilds. She has made short films and received an Appreciation as a short film Maker from Parliament for Richmond Hill, Ontario in 2014. Patio is her debut film.

An estranged man returns home to take back his house. His son tries to reconcile his parents but mother wants to marry someone else.

Majidreza Mostafavi started his film career editing and making short films. His first feature Unripe Pomegranates (2014) was screened in the competition sections of more than 10 international film festivals including Moscow 2014, Sao Paulo 2014, Fukuoka 2015, and Zürich 2015, and it was admired by FIPRESCI. Astigmatism is his second feature film.