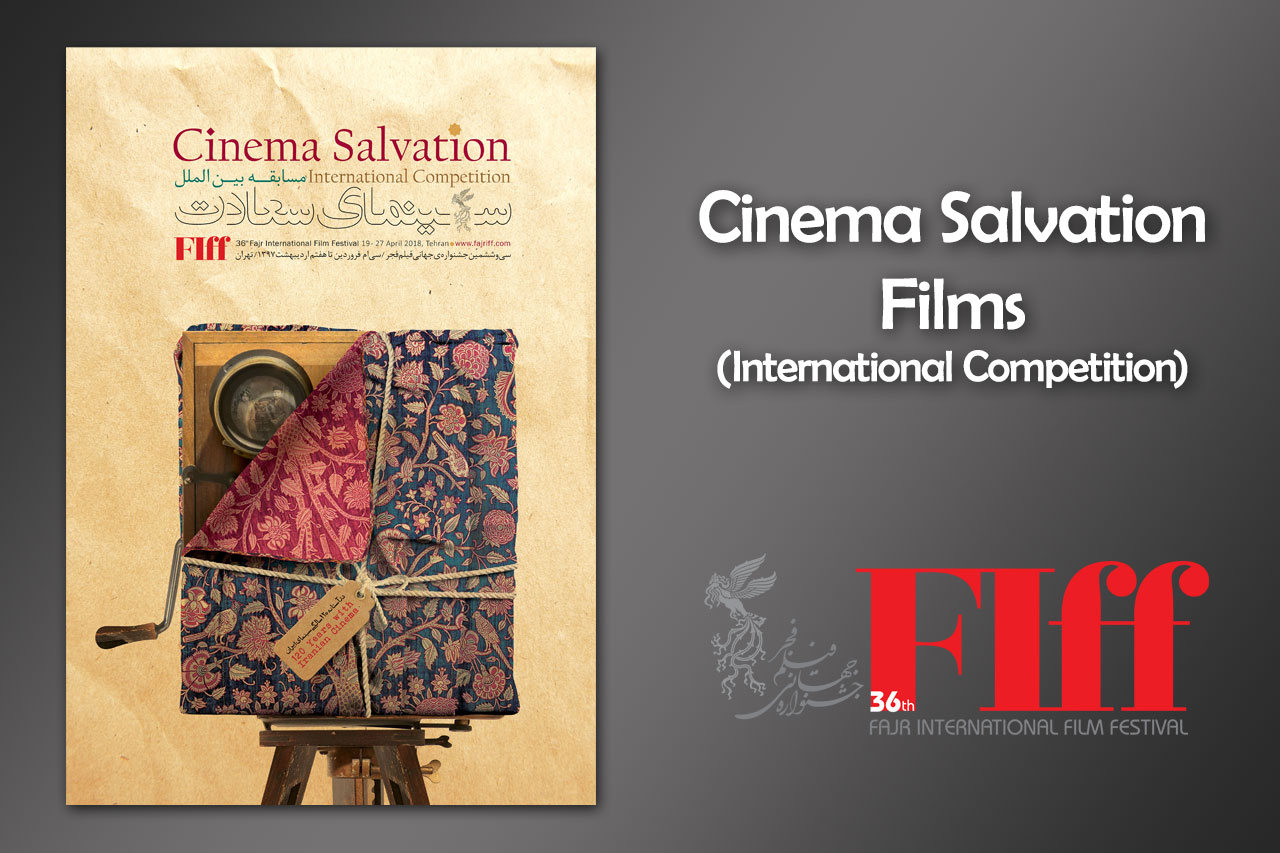 The 2018 Fajr International Film Festival has announced the lineup for its Cinema Salvation (International Competition) program, and it is as solid as ever.

At a presser in Tehran on Wednesday, Festival Director Reza Mirkarimi said 12 foreign films and 3 Iranian films will be shown. Here are all the feature-length titles screening:

Yerken is unlike his peers. He confuses reality with fantasy. His mother is desperate as public school typically doesn’t admit kids like hers. Nonetheless, he has the dream – to attend a public school. When mother leaves the family, Yerken is left alone with his father.

Reindeer hunter Nanook and his wife Sedna live somewhere in the icy wastes of the north. Their daily life is arduous, but they never complain. Instead, they tell each other the old legends, and their dreams. No matter whether they are describing imaginary encounters with animals, humans, the living or the dead, everything has its meaning. A rather special love story, set against the striking backdrop of the permafrost that is also a study of speechlessness and an emotional hardening that can only be softened in the face of death.

Milko Lazarov was born in Bulgaria in 1967. He studied under Vladislav Ikonomov at the Krastyo Sarafov National Academy for Theatre and Film Arts in Sofia and later worked there as lecturer in the film department. His debut feature film Alienation premiered at the Giornate Degli Autoriin Venice.

Teenager Amir is constantly dodging trouble while dealing drugs in the underbelly of Mumbai. Following a drug bust, he evades the cops and ends up on the doorstep of his estranged sister Tara. Complications from concealing Amir land Tara in jail, but she still sees her brother as her only hope of living in the outside world again. While their lives have been darkened by despair, hope may shine from beyond the clouds.

Majid Majidi was born on April 17, 1959 in Tehran, Iran, to a middle class family. He started acting in amateur theater groups at the age of fourteen. After receiving his high school diploma, he started studying art at the Institute of Dramatic Art in Tehran. His feature film screenwriting and directing debut is marked by Baduk (1992), which was presented at the Quinzaine of Cannes and won awards at Tehran’s Fajr Film Festival. Since then, he has written and directed many noteworthy films that won worldwide recognitions, notably Children of Heaven (1997), winner of the Best Picture award at the Montreal International Film Festival and nominated for the Best Foreign Film at the Academy Awards, The Color of Paradise (1999), which also won the Best Picture award from Montreal International Film Festival and set a new record of box office for an Asian film, and Baran (2001), which won several major awards worldwide, notably the Best Picture award at the 25th Montreal World Film Festival and received nomination for the European Film Academy Award.

Dovlatov charts six days in the life of brilliant, ironic writer who saw far beyond the rigid limits of 70s Soviet Russia. Sergei Dovlatov fought to preserve his own talent and decency with poet and writer Joseph Brodsky while watching his Soviet artist friends getting crushed by the iron-fisted state machinery.

Alexey German Jr. is one of the most acclaimed and internationally rewarded Russian directors of young generation. He quickly established himself as an outstanding artist. His first film, Last Train, won Luigi De Laurentis award at International Film Festival in Venice 2003 and other awards; his second feature, Garpastum, was also shown two years later in Main Competition and other awards. Paper Soldier was a big success; it won Silver Lion, as well as awards for direction and cinematography at IFF in Venice program in 2008, and other awards.

Global corporations have established cities and agricultural zones in areas where the climate is relatively good. These cities are populated by the elites, corporation’s executives, scientists, and those multi-ethnic immigrants who have been admitted after passing genetic compatibility tests. For unknown reasons, the city’s agricultural plantations have been hit by a genetic crisis. In a meeting at the headquarters of the corporation which employs him, Prof. Erol learns of Cemil, a fellow scientist who wrote a thesis about the recurrent crisis affecting genetically modified seeds – but the work was banned by the corporation. Erol sets out to find Cemil and finds him, who is searching for the remains of life.

Semih Kaplanoglu was born in 1963 in Izmir, Turkey. He is known for Egg (2007), Honey (2010) and Angel’s Fall (2004). He is one of the most acclaimed writer-director-producers of contemporary filmmaking in Turkey. His debut feature in 2001 Away From Home was awarded Best Director in Singapore IFF. In 2005, his second feature Angel’s Fall received Best Film Awards in Nantes, Kerala and Barcelona Alternativa FF. His third feature Yumurta (Egg), which premiered in 2007 Quinzaine des Realisateurs, brought Best Director awards in Fajr IFF, Valdivia IFF and Bangkok World FF. The film received around 30 awards. In 2008 Süt (Milk) premiered at the Venice IFF, and also screened at festivals around the world, earning him international awards, such as FIPRESCI prize at the Istanbul IFF. His recent feature Bal (Honey) the third part of the Yusuf Trilogy, winner of Golden Bear award in 60th Berlinale IFF, traces the origins of soul.

Tito, a scientist who works on a secret project for the US government, has always been known as the legendary American Uncle by his nephews, Anita (14) and Little Tito (7). When they become orphans, they get to Nevada to join Tito, but find a rather depressed professor, a desert, and the secrets of Area 51.

A failed journalist is forced to fabricate news to avoid losing his job. When he becomes the most popular journalist around, he has to decide between continuing the lie, or telling the truth and losing his fame.

Tomas Alzamora, director, screenwriter, DJ and rapper, began his film studies in the University of Arts and Communication Sciences UNIACC, specializing in directing, cinematography and editing. He recorded videos for renowned Chilean artists such as Ana Tijoux, Joe Vasconcellos, Jonas Sanche, etc. In 2017, he premiered his debut film at the Miami Film Festival La Mentirita Blanca.

A 70-years-old man is driving a car being mad, and suddenly he runs down a girl. After the accident they come to know each other more.

Temirbek Birnazarov was born in 1968. He graduated from Almaty Institute of Theatre and Cinema in film producing.

In a Hui Muslim village in Northwest China, a young couple begin their arranged marriage without knowing each other’s secrets. Confronted with tasks of mundane life, will they learn forgiveness and nourish true love?

Miaomiao Liu was born in Ningxia, in 1962, and graduated from Beijing Film Academy. She had her directorial debut in 23. In 1992, her film Chatterbox (Za Zui Zi) was screened at Venice and won the President of the Italian Senate’s Gold Medal. He Family Scandal in 1994 was awarded the Best Film at the 2rd Beijing College Student Film Festival.

This film revolves around the life of the great traditional Irish singer, Joe Heaney. The stylized black-and-white picture, obscuring the border between documentary and fiction, is a cinematic ballad that invites viewers to join the enigmatic, talented and idiosyncratic artist on his dramatic life journey; along the way we also get a sense of the difficult yet humble life of the people of Ireland over the course of last century. The film takes us to the district of Connemara, and to the village of Carna, Joe Heaney’s birthplace, considered the cradle of local folklore, and then the camera accompanies him on his travels round the world. The power and magic of the songs provide the central motif threading its way through the film.

Pat Collins, a native of Cork, has been making films since 1998 and now has more than thirty features, documentaries and short experimental films to his name. His filmography includes documentary works about writers Michael Hartnett, Nuala Ní Dhomhnaill and John McGahern. He also co-directed a documentary about Iranian filmmaker Abbas Kiarostami. In 2012 he turned out the feature film Silence, which had its international premiere at the London festival and was distributed by Element Films in Ireland and New Wave Films. Song of Granite is his second feature film.

The Miner is based on a true story of an immigrant miner in Slovenia. He finds thousands of bodies of people thrown into a pit after WW2. He affronts the society by insisting to arrange a funeral for those unidentified victims, thus risking his job, the wellbeing of his family, and even his own life.

Hanna Slak, Slovenian, born 1975 in Warsaw, based in Berlin, is a film director, multimedia artist and writer. She has written and directed feature films for the big screen (Blind Spot, 2001; Teah, 2007; Rudar, 2017), as well as documentary films and experimental shorts. Among the awards for her work are Best Director, Best Actor and Best Editing at the Festival of Slovenian Film for RUDAR; Silver Bear for Short Film for the experimental documentary Laborat (writer, editor, producer); Best Director at Sofia Film Festival, Best Actress (Manca Dorrer) at the Thessaloniki Film Festival and Don Quijote Prize at Cottbus Film Festival for feature film Blind Spot; Best Camera, Best Sound and Critics’ Award for Best Film at the Festival of Slovenian Film for children’s feature film Teah.

East Berlin, 1956. During a visit to the cinema in West Berlin, high school pupils Theo and Kurt see dramatic pictures of the Hungarian uprising in Budapest on the newsreel. Back at school in East Germany, they share the tragic untold news with their class and spontaneously hold 2 minutes of silence in solidarity with the young Hungarian victims during a lesson. But the gesture causes much bigger ripples than expected: the schoolchildren become objects of the political machinations of the fledgling East Germany.

Lars Kraume celebrated his first success with No Songs of Love, which premiered in the Panorama section of the Berlinale 2005. In 2009, he staged the oppressive movie drama The Coming Days. Finally, his movie The People vs. Fritz Bauer at the International Film Festival of Locarno in the summer of 2015, won the audience award. At the German Film Award 2016, he was honored with a total of six Lolas – including Best Film and Best Director.

Ahmad Otraghchi, born in 1980,  studied directing in one the most famous Iranian filmmaking centers in 2000. He has worked for TV channels as writer, editor and director.

Alireza Ata’ollah Tabrizi, born in 1981, is a graduate of Electrical Engineering. He studied filmmaking in 2010.

There is a say that people do not change suddenly. But it is us who do not pay attention to them for quite long time.

Tamtin Lavafi is an Iranian writer and director. His films include Berlin Minus 7 and Hattrick.

On the very last days of the Iraq-Iran War, a group of Iranian soldiers from three generations return home. A serious attack on a strategic border area forces them to make a tough choice.

Bahram Tavakoli, born in 1976 in Tehran, is a graduate of Theater and Scriptwriting from Tarbiat Modares University. He started his career with making short films and designing movie posters. He is known for his second feature Barefoot in Heaven (2007) which was critically acclaimed. Here without Me (2011) and A Walk in the Fog (2010) were selected and awarded in a number of international film festivals.