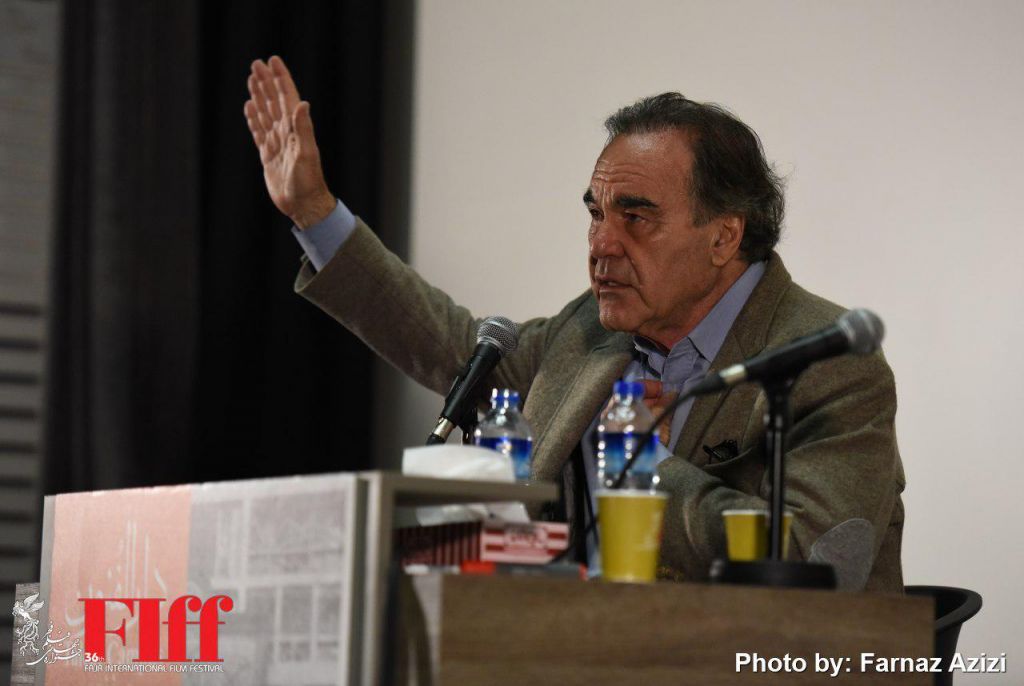 American director, screenwriter and producer, three-times Oscar winner, Oliver Stone, who is best known for the hit films Platoon, Born on the Fourth of July and Natural Born Killers, taught the last Fajr Filmfest workshop of the Talent Campus in Charsou Cineplex.

Addressing the students of his workshop, Stone talked about a range of topics, including his personal life and his award-winning films. He also answered questions from his students:

My early life was disturbing like many of you. I was talked to right by my father when I was young but he paid me money alright and it was a good motivation. He gave me good money for America that time and with that money I could buy comic books. Years later when I was 18, when I had left high school and I was struggling with college and left the college and went to Vietnam as a teacher, it was a very painful and confusing time. In that period, I felt like I need to write again and express my feelings.

In 1965, I wrote a book; it was not published at the time but it was a gigantic book of about 1300 pages of handwriting, messy but I was proud of it because it was something I had done out of school, and I had done for myself. I have made 3 short films, two of them are not good and one of them was OK, but when I got into film business, the pressure of making a film was immense. When I first started to get a film made it was difficult. I made two horror films in 1973 called Seizure and one in 1981 called The Hand. I have never been successful with these horror films.

It was a nightmare to make this movie Snowden. I was not able to get any money out of the United States. No one wanted to touch Snowden. Snowden is an American story and an American hero on my mind, but he is not an existing hero. He is not the guy who punches people on the face; he is not strong looking man. The odds are very hard to make that kind of movie but I had to tell that story because it was crucial that people understand what he did. People still do not understand in my country. Most people in my country think that he is not a good person because he gave away secrets. He worked for the National Security Agency and he signed an agreement. He said he signed off with the American constitution, that is his point and NSA is violating American constitution which I agree with. He helped us a lot with the story. He gave us a lot of technical details of NSA. The relation with the girlfriend, the film is absolutely authentic. This girl did not have any knowledge of what he did.

After his introductory speech, Stone answered some questions from students in the following:

-Some people in Iran think that Oliver Stone could never have made these movies not being killed. I have never met officially a CIA agent or worked with them and I would not do that. I have turned down Pentagon money when they wanted me to revise a script. As you know, CIA is involved in Hollywood now. When Argo got made, CIA was all over that and if you remember the night Argo won the Academy Award, on television they cut from the Best Picture Award, Jack Nicholson. I think he was giving the Best Picture Award, and they cut it to the White House.

-I don’t dictate works unless I have to do it, unless last minute thing. I will go all away with democracy. Try to make everybody have their says, to do their rehearsals. Try to work it out before you get to the set; try to keep it free and easy.

-Try to make tension out of everything you can when writing a script. If you had been sitting down to dinner, have the guy tell his wife I don’t like this soup is shit, and the wife throws it at him. That’s exaggeration but you are not doing that in Sweden.

-Inside the framework, you play with the character, with the best you could to make more of the material. If the rules are rigid, you should play with the rules. It is a tough time, you have to be smart and use your humanity and keep it. Don’t lose it.

American film director Oliver Stone and his Iranian counterpart Reza Mirkarimi, who is also the director of 2018 Fajr International Film Festival, will meet for a panel hosted by Felestin Cinema on Thursday to talk about their professional experiences. The one-off panel will begin at 15:00 in Hall 1 of Felestin Cinema, and all festival goers are invited to join in!