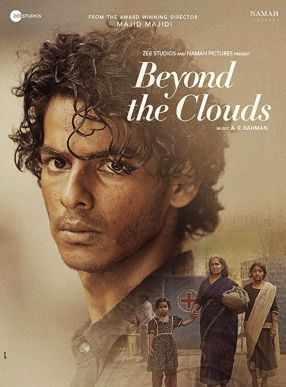 Teenager Amir is constantly dodging trouble while dealing drugs in the underbelly of Mumbai. Following a drug bust, he evades the cops and ends up on the doorstep of his estranged sister Tara. Complications from concealing Amir land Tara in jail, but she still sees her brother as her only hope of living in the outside world again. While their lives have been darkened by despair, hope may shine from beyond the clouds.

Majid Majidi was born on April 17, 1959 in Tehran, Iran to a middle class family. He started acting in amateur theater groups at the age of fourteen. After receiving his high school diploma, he started studying art at the Institute of Dramatic Art in Tehran. After the Islamic Revolution of 1979, his interest in cinema brought him to act in various films, notably Mohsen Makhmalbaf’s Baykot (1986) where he played a frustrated communist and Ali Asghar Shadaravan’s Teer baran (1986) where he played the role of real life character, Andarzgoo. Later, he started writing and directing short films. His feature film screenwriting and directing debut is marked by Baduk (1992), which was presented at the Quinzaine of Cannes and won awards at Tehran’s Fajr Film Festival. Since then, he has written and directed many noteworthy films that won worldwide recognitions, notably Children of Heaven (1997), winner of the Best Picture award at the Montreal International Film Festival and nominated for the Best Foreign Film at the Academy Awards, The Color of Paradise (1999), which also won the Best Picture award from Montreal International Film Festival and set a new record of box office for an Asian film, and Baran (2001), which won several major awards worldwide, notably the Best Picture award at the 25th Montreal World Film Festival and received nomination for the European Film Academy Award. In 2001, during the Afghanistan anti-Taliban war, he produced Pa berahneh ta Herat (2003), an emotional documentary about Afghanistan’s refugee camps that won the Fipresci Award at Thessaloniki International Film Festival. Majjid Majid has also received the Douglas Sirk Award in 2001 and the Amici Vittorio de Sica Award in 2003. In 2005, he directed The Willow Tree (2005) about a blind man who falls in love with someone other than his wife when he gets the chance to see again, which won four awards at the 2005 Fajr Film Festival in Tehran. He is one of Iran’s most influential directors and his films have a simple and poetic feel to them.