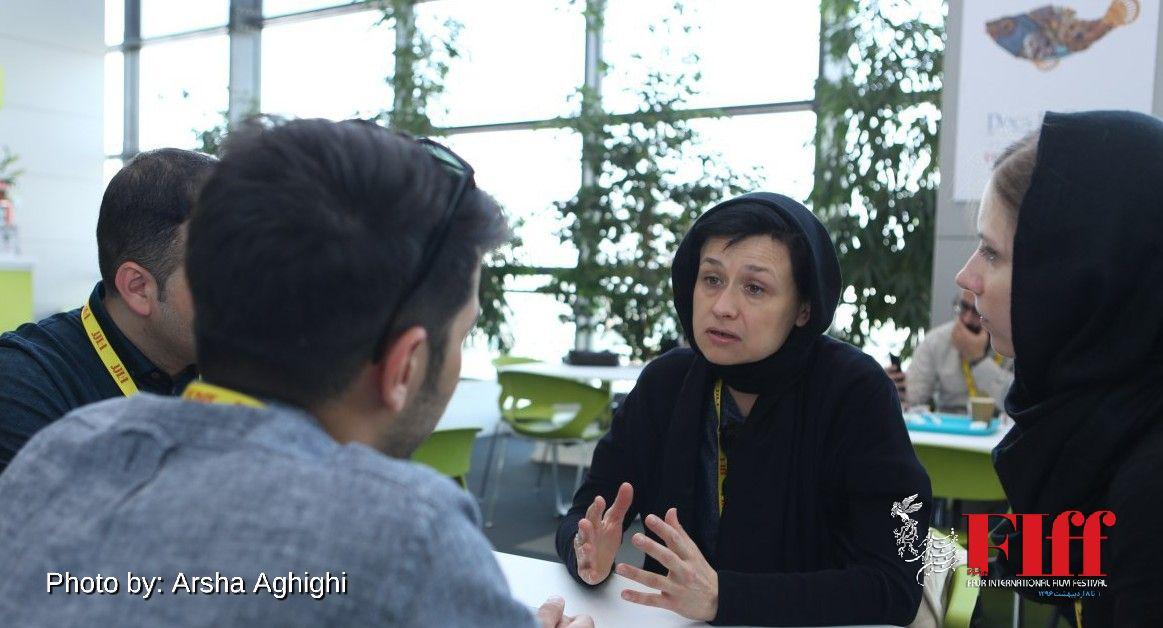 Dita Rietuma and Agnese Zapane are director and senior officer of the National Film Center of Latvia. The center’s main task is to implement the country’s national policy in film and cinema industry and to allocate the necessary budget for the filmmaking industry. They represent Latvian cinema in Fajr and they tell us they are here to find ways to work with their Iranian counterparts.

Tell us about the purpose of your presence at Fajr?

Zapane: This is our first year in Iran and we both represent the National Film Center of Latvia. As you know, there is a section by the name of Retrospective of Baltic Cinema, so we are here to represent Latvian films.

What do you think about the general atmosphere?

Zapane: Well, this is only our first day and we can only comment on the festival’s building which we believe is very well organized. Holding everything in one place is really a fantastic thing.

Was this what you had imagined about FIff before your trip?

Zapane: Not really. I did not have any idea about the country and I was ready to explore. I thought it could be well organized, but how and in which way, I did not have any idea. I think it is really pleasant to have everything in one place, because in some festivals, different sections are scattered all over the city and you have to run to catch up with your desired schedule.

As your first impression, how do you compare FIff with other international film festivals?

Rietuma: I think the infrastructure seems great and everything looks so neat. As Agnese said, having everything in one place makes it easier for you to do the things you intend to do like meeting the people and attending the programs you planned for. To be honest, this is above my expectations.

You said you are here to represent Latvian films. What about your perspective on Iranian cinema, are you familiar with it?

Rietuma: Yes, and it might be interesting for you to know that we had a retrospective on Iranian cinema on Riga International Film Festival, Latvia, ten years ago. Personally I know the works of Abbas Kiarostami, Jafar Panahi and of course Asghar Farhadi. The Salesman was distributed in Latvia which was the first Iranian film, after 25 years, to be screened.

Zapane: Actually, when I went to The Salesman’s screening I was surprised that we had a full house.

Rietuma: I believe Iran has a great cinematic tradition and a great film culture and that is what motivated us to come over here and see for ourselves.

What movies do Latvian audiences like to watch, considering the fact that you said it was a full house when you were screening The Salesman?

Rietuma: Thanks to the Oscar’s publicity and Cannes Film Festival, the Latvian people know the director very well. But as far as our people’s taste goes, they are mostly interested in commercial movies just like many other countries around the world. But there are quite a lot of people who are interested in arthouse films and these days more and more European and Latvian films are screened there. We produce about five feature films annually plus some co-productions which are about ten titles per year. So you can figure that we have a small film industry. There are two Latvian films which are going to be screened in Fajr by the name of Chronicles of Melanie and Exiled.

What are your plans as an organizer to improve your own cinema so that your people become more interested in it than mainstream Hollywood movies?

Rietuma: We are working quite hard on that but first you need to get subsidies for film making. We are doing much better now than five years ago, but we also need to teach our youngsters more about the values of cinema and guide them to the right direction. Our organization is working on many educational projects in that racket, just to bring the film culture to the younger generation. It is the only way to teach them to look for more valuable factors in films.

What are you looking forward to achieve during your stay here?

Rietuma: We have to discover more during the time we are here. We are trying to make links between two different cultures and we are looking forward to it.

Zapane: Maybe if we can have some pitching sessions or even encourage co-production with some European countries it would be great for us. We also want to look at the video library, hoping to find some good Iranian films for distribution in Latvia. We might as well give some suggestions to the festival managers. Hope it would be useful.