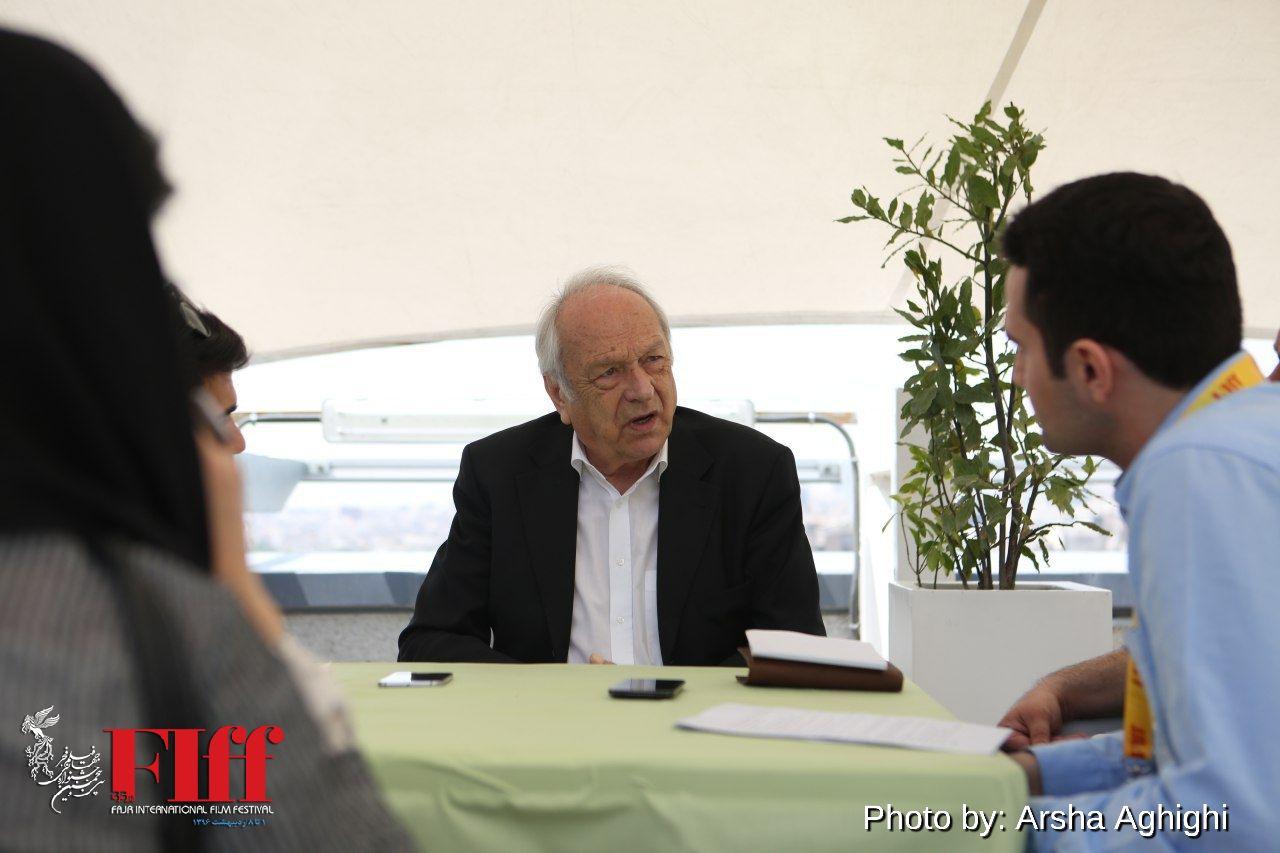 Veit Heiduschka is an A-list Austrian film producer. He has produced about 50 feature films with international contributors and well-known directors such as Michael Haneke. Here is an interview with him on the sidelines of the ongoing Fajr event:

You have been closely associated with Fajr since 1998. How do you see the quality development of the festival over the years?

It has become bigger, more comfortable, and there is a Film Market which I don’t think existed at that time. It was smaller and maybe more familiar than today. But the people are the same, very nice, very helpful. I did not see any film here because I have all the other dates for giving lectures at workshops. I think it’s bigger and more international people are here. But I think it might need to be a bit more organized.

What I have seen is more eastern. From Russia, Azerbaijan and etc., and I did not see much from Western Europe but it can change. The question is how many you can invite and which kind of films you can have. The problem is when a film is invited to an A-festival it is forbidden to screen in other festivals before that. It means I can only come with my film for instance Michael Haneke film, when it was screened in an A-festival like Cannes or… (Laughs), actually Haneke is specialist for Cannes, I cannot give it to you before that. The other thing is that every day in the world one or two festivals are being held and festivals live on our films. It means that we say ok, if you want our film you have to pay for screening because festival has money and its secretary and big bosses make the money when they have our films to hold a festival. Of course you have filmmakers who happy to screen their films here because it is a B or C-film, but an A-film is very difficult to be here. When you want to be an A-Festival you have to invite many international critics and there are some conditions and if you fulfill them you are an A-festival.  A-festival is very important in Europe because when I am invited to an A-festival, I get financer and money for the next film automatically so everyone is very interested to go to an A-festival. Participating in it is one thing and to have the prize is another point, and it helps to produce the next film. It means Tehran could be an A-festival but if it fulfills the conditions like other festivals like Moscow. What you have now is B or C. Actually I don’t exactly know.

For your information, this year an agent will come to rate this festival.

International Federation of Film Producers Associations in Paris. You have to contact and invite some of their agents here. Because when you are an A-festival they will give you some regulations to follow. For instance, it is only allowed to screen a film maximum 3 times in a festival and not more, and a film trailer must only be 5 minutes long for commercial presentation.

In the time of Funny Games, in New Zealand there was only 18 cinemas and one cinema could not pay the fee for the film and they came with the idea of making New Zealand fil festival and they got the film for free and everybody was OK since that was a festival. And then the FIAPF made the regulation or another movie we gave to Russia to make a commercial from it for TV and they just cut out the title at the beginning and the end and showed the movie. Then FIAPF made all these rules and regulations to control these misuses. So if Iran wants to be an A-festival it is possible, but it has to go through all these international regulations.

Even with some restrictions that we have in Iran such as censorship?

This is the problem that every festival could face. But it’s very easy, because if you are A-festival you can make all the technical restrictions for entry and they have to fulfill them to get in. And it is good for both the festival and the producers.

For me, A-festivals like Venice and Cannes are important, because there are 1000 of critics from all over the world coming. I remember Haneke was sitting in a coffee house for 8 days to give interviews for his second movie and his English was not really good (laughs)…but I remember he worked on his English for 3 months before his first English movie Funny Games, because he is a perfectionist. His film comes as a story board and before that he needs to consider everything. He needs to visit every location, he needs videos and photos, and when a location is needed, there will be an architect building the location with all the properties in his mind. When anything changes, there will be a disaster for him because he says how can I rebuild my concept. It’s like a building and if anything is left out, it will fall. So we needed more time for him to rethink it.

One of the goals of international festivals is to secure co-production between the host and the participating countries. But we haven’t had much chance in that area in Iran. why do you think is that?

I have made a lot of co-production films. There are a lot of agreements and unions for securing funds for production which involves more than 2 different countries, and there are regulations involved for supervision of this process, and there will be governing regulations on the right implementation of them. But in a country like Iran, we have a problem because we don’t know our rights. I cannot go to a court here and I would not go to a court here. I had a case with Farhadi’s project. We signed a contract between Iranian and Austrian parties to shoot a film in Austria and we were preparing everything in Vienna. The director came to Vienna one week earlier and then the crew came to Vienna and there was everything set to start shooting, but after few days the director left Vienna and eventually there was none of the crew there. So we followed up on the problem and they told us that it’s Ramadan and some issues like that. But we had made a lot of expenses and according to our agreement in this situation the Iranian party should have covered these expenses. Unfortunately, they didn’t pay it and our lawyers couldn’t make the claim because of some sort of difficulties and our lawyers said we couldn’t have the money back.

The other problem is the copyright law in Iran. Actually back in 2002, I had a speech about copyright law in Iran and there were a lot of people attending. It’s interesting that we have never sold a Haneke film to Iran but everybody has seen them on DVD (laughs)…well that is my money… (Laughs)!

But this is not only Iran; the same thing happens in Russia and some other places. I heard that you shoot your film in digital and then transfer it to negative for screening. Is that true?

No, not only for screening. The first film we were shooting on the DVD and digital format was Cache, and we had a lot of problems, because the Sony cameras we were using stopped working. After 4 weeks of filming we found out that there is a double picture problem which was visible on the big screen. I talked to Sony engineers and they told me that this problem happens on the big screen and it’s not visible on the TV screen. Fortunately, the engineers came up with some solutions and finally we showed it to Haneke in a cinema in Paris. I told him there is a problem with the picture and he said I don’t see it so we played it over few more times and at last he said, “I don’t see the problem and if I can’t see it no one can see it.”

I now make every digital film a film negative and a copy, because it is the only possible way for me to have it for 100 years.

The problem in Europe is that you can only develop negative films in London and to make the sound you have to go back to Paris because all the other companies went bankrupted and don’t work since there was no job for them in the past years. It actually cost about 40,000 euros to do this in Europe now.

You mentioned that the industry is looking back at the negative film, what could possibly be the reason?

Music specialists say analog recording on tape recorders make the music much warmer and gives a much better quality than digital. I think the same thing happens to a film. I think Hollywood is going back to the negative era for the same better quality.

Haneke likes Iranian cinema and maybe he tries to catch up with its movies as well. He was in Cannes to watch The Salesman and he really liked it. I was a member of the Academy of Motion Picture Arts and Sciences and Farhadi’s film was nominated.

Did you vote for The Salesman?

It is forbidden for me to say (laughs), but I can say it’s a very beautiful film.

Iran has won two Oscars. But is this enough to attract the attention of global audiences to Iranian movies?

What I always say is that films are the best possible visiting cards for any given country. Because in the film you can show how a country is now. In a film you have the music, the environment, and the feeling of the country.

Are there common qualities in cinema today that you dislike? Is there something you try to subvert or avoid or rebel against?

Expert say the entertainment industry will be conquered by companies like Netflix and Amazon. These companies are more interested in mainstream films rather than national films, which they would be able to market all over the world. So they are not interested in independent films from Iran or Austria and etc.

Events like Fajr are our only chance to make national films which I’m really interested in. But governments should help and finance these projects, because film is an important part of the culture, and culture is essential to us. It is the backbone of humanity and that is what differs us from other species.

What you need is a good script and a good story. I am really interested in the life stories that are happening in this country like the story of The Salesman, not some sort of action movie which Americans can make better and will be phony and a waste of money and resources.

Back in the days, one of my friends insisted that I stick to my own field and no go and try action movies and such. One day, the Austria Film Foundation sent me a script, saying it’s a good script and nobody wants to do it. It was Haneke’s script. I read it and it was such a good story and I felt that I had to do it. You can make great films but you need state support.