Oliver Stone: It’s Time For Americans to Wake Up 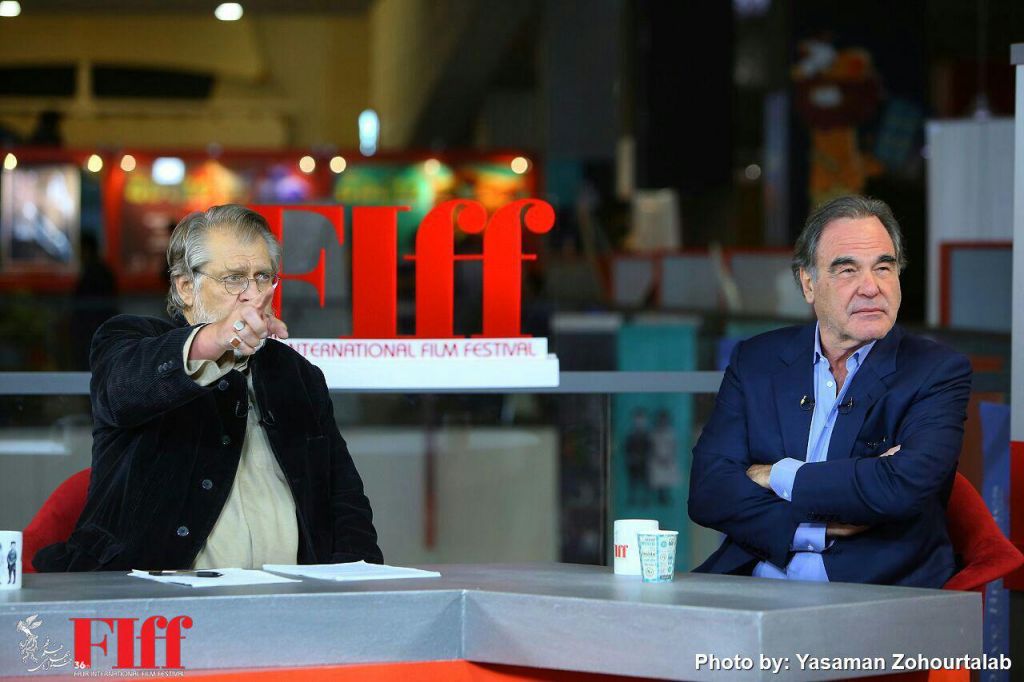 American director and special guest Oliver Stone had a live interview with Nader Talebzadeh on Iran-based TV Channel 4 and on the sidelines of the 36th Fajr Filmfest.

On meeting a wide spectrum of films, from so many different subjects that no one has even touched, Stone replied: I believed at the time, like any one in America I thought congenitally. Years later when I read more about it, the researchers did a great job in first generation, they bring out all the evidence that was missing the more I got in I more fascinated. They did the big investigation after the movie because of the movie and more stuff came out and there were lots of new evidence.

On the Vietnam War he said: I went to Vietnam to teach and then joined the merchant marine as a wiper in the pacific and then I came back to America and I wrote a book. I went back to Vietnam as a soldier when I was 21.

That’s a great subject I did it from 3 sides. Platoon is my story, 50 percent was my story but dramatized what is like to be a Platoon in a jungle. What the odds are. The second one was the story of Ron Kovic who was paralyzed, the movie was about one bullet he questions of himself and his life and you see how Tom Cruise did it. I am so proud of the movie it was such a big epic. After that I did heaven and earth and it was about a Vietnam peasant woman who was actually on both sides of the conflict.

America could never have won that war because we were always occupying force in Vietnam but the Vietnamese were there. They were not going to leave.

On the Middle East conflicts he said: It was an original plan when George Bush was elected. We know now, there was a document 7 countries named for regime change starting with Iraq ending with Iran. Iran was a big target and I think still is a target and it is on the board. The fans of attacking Iran are coming back.

2000 to 2018, I looked at it as a tragedy on one war of America ISIS and Israeli trying to destroy the Middle East as it exists to make it to an American parking lab to make it over and I don’t think it is goanna work and I think it’s a very destructive plan. I think it’s a tragedy

On Natural Born Killers he said: Let’s go one thing straight, Tarantino wrote the original script called Natural Born Killers, I bought the script. We remodeled that heavily and he was very angry with that but we worked that out since then. I like to movie the way it is but it was a radical satire about American media and that was the thing bothered me at 1993 when I made the movie. The country was going nuts it was worse than ever. The analytical process in America to examine the news does not exist. It seems like it is based on sensation and that’s what I saw. That’s why I did Natural Born Killers.

On Jim Morrison he said: I would not say that Jim Morrison to me was a visionary poet. Yes, he was a rock star but there were bigger rock stars. You know the Rolling Stones, Beatles and etc. But I wanted to make a movie about the visionary who saw the world different. He was self-destructive beyond relief. It’s a dark movie but it is powerful. The music of The Doors it drives the movie to the music and you write in the scenes how the music developed.

On zombies in America he said: It’s the current situation in the United States. We have done lots of zombie series. That’s the American state now. I’m awake I’m not at sleep and I think lots of Americans got to wake up and care about their country. We want them to do good, most of Americans do good, but it is the media presence all these issues in a fraction way without simplicity and I want to make it simpler to understand. If they understand it the American State will change and it would be a good thing how do we change.