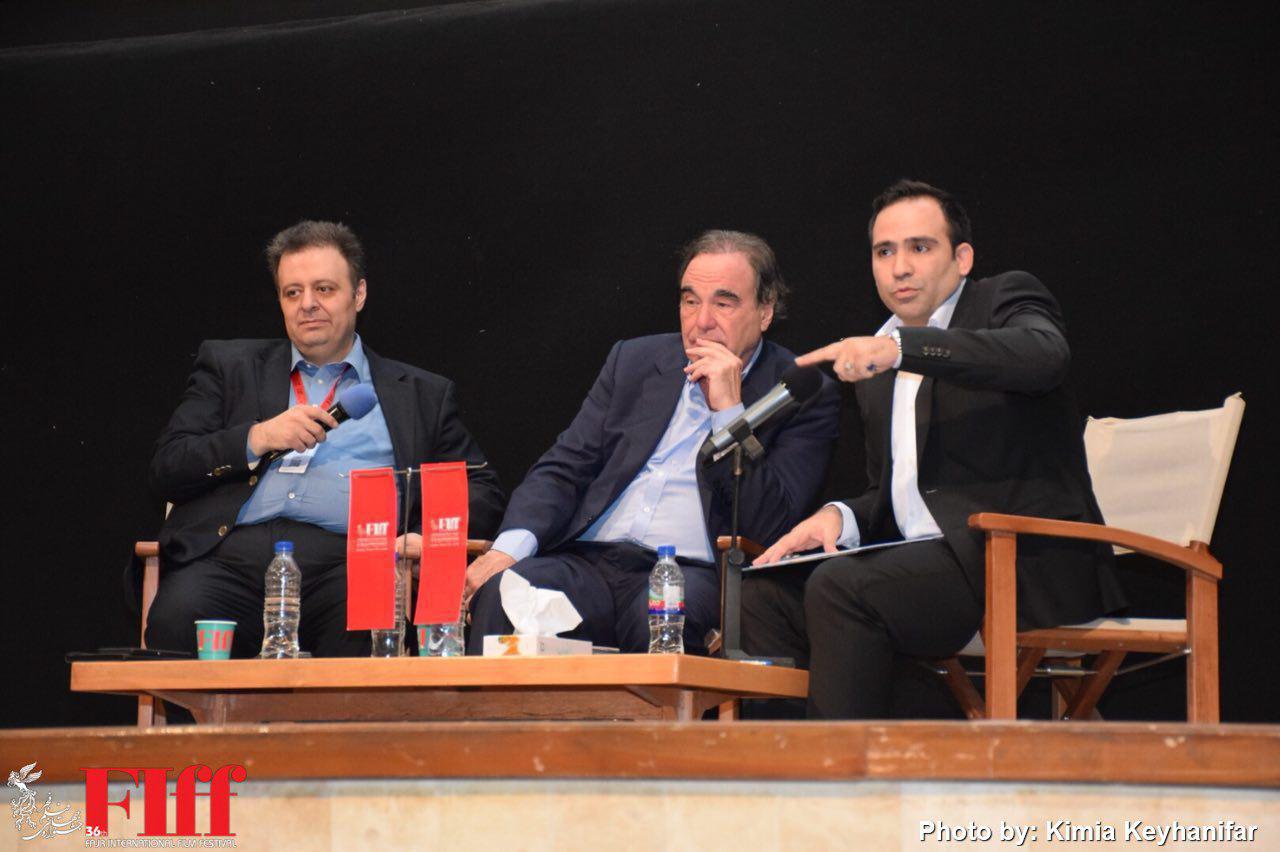 On Thursday, April 26, Felestin Cinema hosted an expert Panel on Film Directing Experiences with Oliver Stone, during which the A-list American director talked about his films and achievements in cinema, as well as Iran, Chemical Warfare, Neo-Con regime-change campaigns in Muslim heartlands, and more.

The three-time Oscar winner spoke about the time he spent in Iran: My time in Iran was spent very well. We walked through the bazar today and saw softness and peace and a lot of nice people.

I am worried about you because I see the threats you face from many countries on the both sides. You are maybe too soft. You had been gone through a big war from 1980 to 1988 and I saw a film about that. At the Peace Museum, I was horrified to see how much gas was thrown into Iran. It is very important to realize that in America and in the West, we talk about chemical warfare, we talk about Syria. I believe this false flag operation that we throw chemical warfare around is horrible. we ignore the fact that we and many European and south American countries have supplied the old Iraq with chemical warfare, mustard gas and poison gas.

You know there is something wrong, this mustard gas, this use of chemical weapons. You have to keep reminding people that it was thrown into Iran and destroyed many people, scarred and wounded. You have a walking wounded population who suffered from this war and people forget that; and America led the charge because we know that Mr. Regan wanted to attack Iran. We have to remind people, you do too. I say this in conjunction of my visit to the Torture Museum which was sickening. I have been to many places like this all around the world. I saw the Nazi camps. I went to Cambodia in 1970’s. They killed so many people in those prisons. Nobody got out alive. I have seen torture in South America. I never get used to it, it is so awful.

Don’t forget memory, it is crucial. The older generation must remember and pass it to young people. Because you are the film students, put this on film and record it, document it. I say this because I was upset to go and see a film about the Shah of Iran. It was a documentary made apparently with government resources and it was supposed to be about the Shah from 1940 to 1979. The film was a mess and what I know as an American, your revolution is far more that what I saw on that film, called Royal Heritage.

Iran should remember what happened under the Shah. Germany after World War II learned their lessons, in Japan they didn’t. In Japan, they don’t know anything about the World War II. It’s very crucial for history to continue and to be told by the truth. In the movie, they don’t make it clear that the CIA, MI5 and MI6 were behind the coup in 1953 Iran. It’s very confusing but we know that America was running the show. You don’t know that from the documentary, you are lost without that.

When shah goes into exile, not even mentioned that have a tremendous controversy about letting the Shah come to America and many people like Henry Kissinger wanted him to come but Americans didn’t want him and it was politically shut off. You’ve not even told this to Iranian people. This is upsetting and there is no strong documentary about this material. We have more information there in the United States about Iran that I saw in this documentary.

On his new movie U-Turn: This is a film noir and the tradition of it. Every key player should die, there is no hope. However, you can cheat in America and make some people live. The characters were real to me and if you look at the movie on very different levels. it’s about insistence more than anything else. If you look at America, in many places they have lots of strange behaviours, lots of strange looking people and a lot of stupidity, and I think U-Turn acknowledges that as you see. Sean Penn plays a complete loser, no hope or redemption for him, but he came trying to crawl out the bucket like a scorpion trying to crawl out of a bucket. Everybody gets pull down at the end. You can make a dirty movie like U-Turn fascinating. Nothing should be off the table.

I’m not a Politian. I’m not an activist and I feel most of the time that I am a dramatist. The dramatist can also tell history in a way that sometimes historians have missed. It is not a conflict.

Michael Cimino was responsible for producing Platoon. It was written in 1976 but it was rejected and not made by any filmmakers, because they didn’t want to depress America. I was very depressed on that and it was painful. But years later, he said that I love Platoon, I love you to make it, and I’ll produce it. It was his initiative that got it started again in 1983. Working with him was not easy, because Michel is difficult. I was never on the set and I was working on something else, but the problem was that screenplay was ruined by the producer by putting his ideas in it. So, it didn’t work for me. He did not make it but he kept the script. He never gave the script back. I sued to take it back and I had a case, so we got the script back.

I worked with Brian De Palma on Scarface. I learned a lot. The producer had hired the actor Al Pacino and wanted me very much to work with him. Scarface went 3 months over budget. It cost too much money at that time. There was so much pressure on Brian to finish this movie in 3 months, but he couldn’t do it. There were problems between Al and Brian. I was in the middle. Al was using me as his ally. I think he is a good actor. I was working with him again on the film Any Given Sunday, years later. Brian and I have learned a lot watching him, but his energy level was lower than mine.

I wouldn’t make a film about Obama. From 2001 to 2018 the United States has developed, implemented and executed regime change in Middle East. This was planned since 2001 by neo conservatives who were controlled the George W Bush cabinet. Their goals are to destabilize seven nations in the Middle East and Northern Africa. These presidents including Obama are part of that plan. Obama maybe more humanitarian. He speaks better, he is a democrat, he is coloured, but still part of that empire. Nothing has changed, the strategy hasn’t changed. It is a war state. They are serious about destroying your country. They believe in the concept of creative destruction.