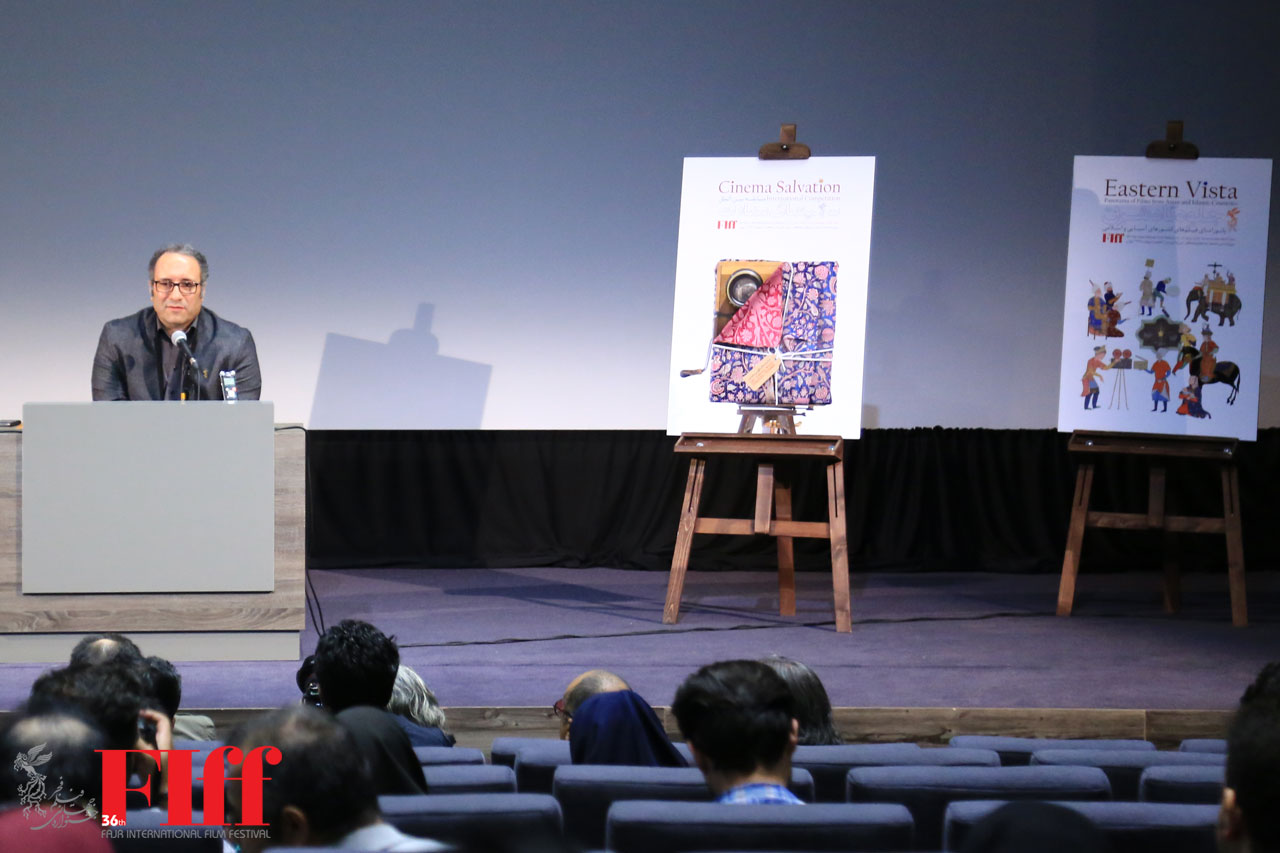 On Wednesday, April 11, Director of Fajr International Film Festival Reza Mirkarimi had a presser in which he outlined the programs, goals, and aspirations of the 36th edition.

He first thanked the Culture Ministry officials and media persons for their continuous support for FIFF and explained that as Iran’s major international film festival, Fajr has grown to become one of the biggest film festivals in the Middle East and Asia: FIFF seeks out excellent films from the region, particularly from the Muslim world, and from around the world, and brings them to Tehran, where filmmakers and film fans can enjoy them, meet emerging filmmakers, sell and buy films, invest in future productions, or simply be inspired and enjoy the ride.

He outlined all the outstanding films in different sections of this year and added that over the seven days of the festival, films from a variety of genres will be shown in several sections: The Competition section, a carefully chosen selection of premieres by talented ﬁrst-timers and recognized directors, is just one category. The Competition section is garnering considerable attention from world filmmakers. This year, there were 1690 film submissions and 120 were selected from 54 countries and regions to compete. There will be 29 premieres as well, of which 20 entries are foreign films and 9 Iranian films.

Elsewhere in his remarks, Mirkarimi said Fajr is also a leading showcase for new talent in the Muslim world, adding that the organizers will continue to showcase movies that tell contemporary stories about realities of the region, including the Palestinian resistance, the humanitarian crises in Afghanistan, Myanmar, Yemen, Syria, Libya, and Iraq, among others.

He said Fajr is being held concurrently with several other international festivals such as Bejing, Moscow, and Bucharest, but majority of foreign guests have decided to come to the Iranian capital, which is a great honour for organizers – and a resent and huge challenge for regional competitors.

According to Mirkarimi, since its inception, the festival has been and still is dedicated to promoting Iranian cinema and culture, discovering and cultivating new talent, and has contributed to the careers of countless Iranian and international filmmakers. Past award winners include directors that have gone to garner awards in other international film festivals, or simply their works have featured several times in other film events.

He noted that the festival will present its first-ever Peace Award this year and continue to host exhibitors and buyers from around the world, becoming the most active film market in the Middle East: FIFF has a very strong alliance with regional and international distributing companies, allowing the Film Market to provide a platform in Tehran for networking with representatives of the world‘s film industries, developing international co-productions, and promoting the Iranian and regional film business.

In reviewing the festival’s previous edition, Mirkarimi said: We have renewed the principles that will guide the quality and the content of festival as we move forward. Our short- and long-term vision encapsulates our commitment to share the joys of quality film, propel exchange between film professionals and clients, and cultivate a future for Iranian film industry. As part of our efforts to share the joys of cinema, this year FIFF is adding new programs to its calendar: Filmmaking Workshops offering courses in humanities in collaboration with prestigious Iranian universities and A-list film critics, directors and academics coming from across the globe, such as Italian actor Franco Nero.

According to the festival director, to propel exchange between film professionals, Fajr is setting up Q&A sessions before and after film screenings in which film professionals and film lovers can meet: As part of our efforts to cultivate a future for Iranian film, FIFF will continue to promote Iranian cinema and Iranian identity, and present diverse programs to pass on the joys of filmmaking and film-going to the next generation.

In conclusion, Mirkarimi said FIFF is strengthening its collaboration with the Film Market and aims to contribute to the development and expansion of Iranian cinema not just as a culture but as an industry and identity. He said the festival exists to provide a time and place to share in the allure and delights of Iranian cinema, aims to program a rich and diverse lineup each and every year, and aspires to create a festive event with regional and international appeal.

Presided over by Iranian film writer and director Reza Mirkarimi, the 36th edition of Fajr International Film Festival will be held in Tehran on April 19-27. A host of international A-listers will be attending this year’s event, including legendary Italian actor Franco Nero and influential American film director Oliver Stone.