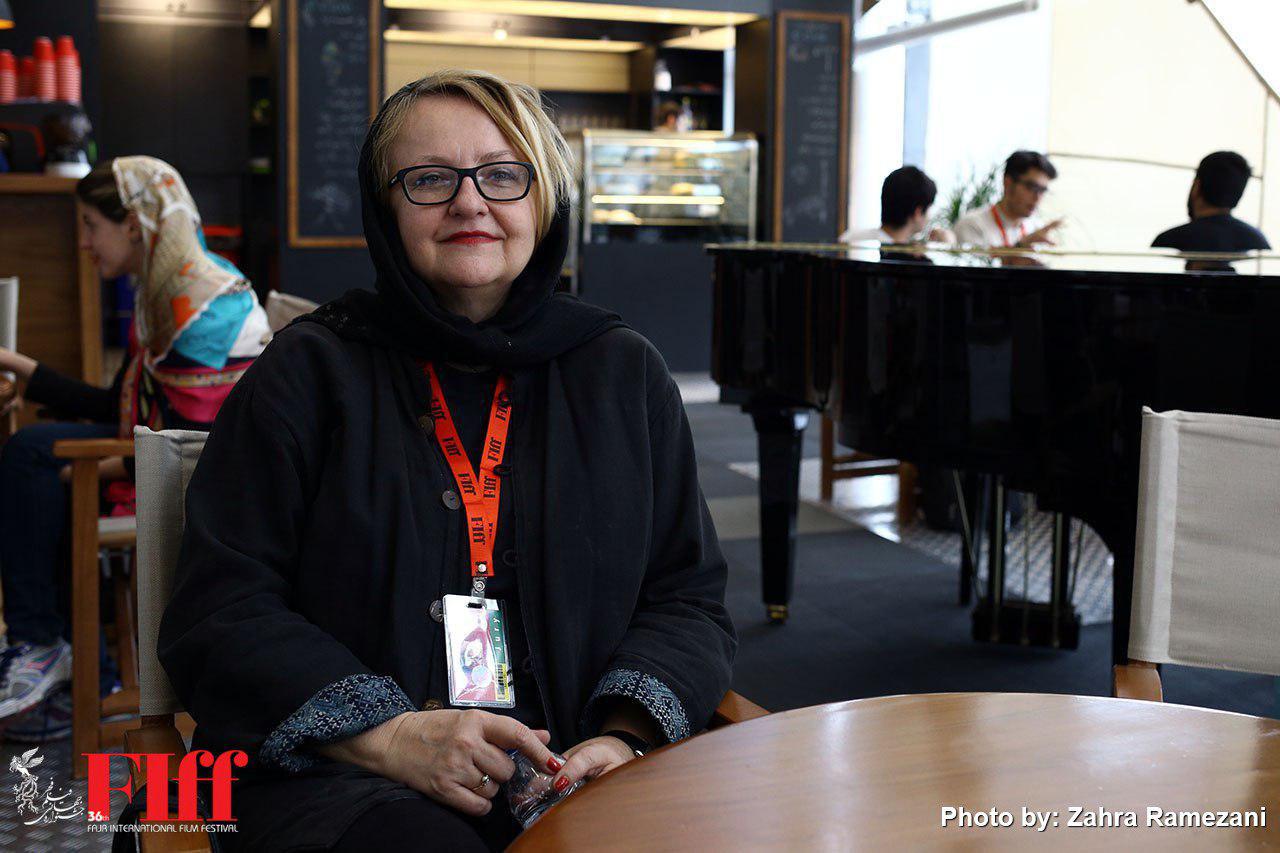 Viera Langerová is a film critic, lecturer, festival consultant, curator and programmer. She studied film and theatre theory in Charles University, and worked as editor in Slovak and Czech film periodicals. She did her dissertation on Asian films and is the author of Film Geography. She lectures in Baltic Film and Media School, Tallinn University in Estonia. She is also FIPRESCI member and juries on IFF Istanbul, IFF Hong Kong, IFF Golden Horse, Taiwan, IFF Dhaka, Bangladesh, IFF Schlingel, Chemnitz and Germany.

In the following, the First Films Jury member of the 36th international Fajr Film Festival talks about the presence of Iranian films in the international festivals and how the new-generation of film makers lost their way to imitate Asghar Farhadi:

As festival consultant how do you see Fajr?

I’ve been on Fajr many times from 2008. This time I’m here after two or three years and I can see a lot of improvements like much better organization and selection of films. Fajr is becoming more professional and a very interesting place to watch Iranian films. I think the festival is doing well and hope that the same improvement and way up will go for Iranian films.

How do you compare European and Iranian cinema?

To speak about Europe as one culture wouldn’t be fair because different cinemas exist in east, west and middle Europe. Iranian cinema reflects its culture on a different way of storytelling from European. It’s more spiritual and poetic if we are talking about Iranian cinema of 80’s-90’s. Today, Iranian cinema is more into realism, social complexes and problems, may be in some aspects political problems and situations. So today it’s much closer to European way of reflecting social problems. I think if we look for the aspect in which both cinemas match, that will be storytelling. Farhadi’s films are the best example of putting together the western way of storytelling and eastern spiritual background, something that we can read between the lines. That’s why he is so popular because he is able to add Iranian way of artistic expression to the best way of westerns storytelling. Iranian films have always been well accepted in Europe. In Prague, we have had a festival of Iranian films for almost 7 years. Every screening is sold out by a huge group of fans. It’s very good that we have this possibility to see Iran from another angle of official media reports, and I would say that Iranian films are the best ambassadors of Iran.

Regarding all the features that you just mentioned, do Iranian films influence European audiences?

The fame of Iranian films in Europe came in the 90’s with films of Abbas Kiarostami, Mohsen Makhmalbaf, Jafar Panahi and later Asghar Farhadi. Everybody knows these names. I give lectures of Iranian cinema in Prague. There is a lot of interest and a large number of people always attend. We can show different pictures of Iran through film. I’m Slovak but I live in Czech Republic, in the film festivals in both countries there are a couple of Iranian films. They are now a regular part of the programs of European film festivals.

Film critics view Abbas Kiarostami as the most important Iranian film maker. What makes him this much special?

Kiarostami was great because of his way of storytelling with a spiritual background. It’s very deeply inspired from Iranian culture and art that you have to go through inside and to look at things from inside to tell a story. It’s necessary to put things between the lines. I’m a scriptwriter and I know how difficult it is to do this. To tell the story like at the moment you are watching what’s going on, but on the other side another feeling is coming on. Another level of idea is coming with the story, like it has double layer, the story and something above. Kiarostami was master in this. Telling something that you’re watching but another message is coming, something spiritual. This way of storytelling helped him to capitvate world audiences. Iranian film makers know how to do that. It’s deeply original, it’s the Iranian way of expression. You have great poetry. Kiarostami was a poet and expressed himself with poetry on to transfer it to cinema, to images with all the content and spiritual atmosphere. That’s why all Europe loves him.

A new wave of Iranian films has gained success in festivals. What’s your take on that?

I’ve been here many times and I was watching a lot of Iranian films. Instead of the poetic films of Kiarostami and his generation, comes a generation much closer to television with the social themes, the cries in the family and very detailed in-description of relations in family. This tradition in Iranian cinema began after A Separation and a huge wave of restrictions began. I think the young generation is going to be a pure epigone of this. Farhadi is famous for his social stories and the huge spiritual background but there is something. The bonus and the edit of a simple story which is not in the young generation when they imitate his style. It’s not good when you see ten films full of family issues, immigration and the kids. But I’ve seen a couple of different films. We put emphasis on originality. If you have your own ideas, you are original. Repeating something is not. We understand that in Iran it’s like following the masters. There is a tradition to listen to the masters, to follow them that’s different. That is what I always explain in my country, that they cannot just criticize it easily. The epigone and that they all imitate is a little bit different from that tradition that we can understand. Films like Fish and Cat was totally different. There are film makers who are different and original. I think they are the new chance for Iranian cinema.

How do these movies showcase Iran’s image overseas?

You have to avoid things because Iran’s image in mainstream media there is not good. There is a danger in film festivals that people take the films there to criticize Iran. I don’t say we shouldn’t take into consideration such movies. Your film makers have the right to criticize. But what has more chances for the future is looking for a different access to the deeply rooted Iranian traditions, because they are very unique and special.

Which potentials are unused in contemporary Iranian cinema?

Iran has a lot of interesting stories in its culture. Diverse cultures exist in Iran. I understand that the cheapest way of making a film is to stay in an apartment for shooting but the Iranian nature of the poetic films of the 80’s-90’s is disappearing from them. I know it’s about money, but you can still shoot in the nature to tell stories of those living outside the capital.

Any advice for younger filmmakers?

Have the courage to go on. I have a 25-year-old son who likes to become a script writer, so I know how hard this can be. Sometimes finishing a film could be a small miracle. I tell my son that your film is here forever. Your film, your name and your idea are here forever and they will survive. So it’s worthwhile to wait for your breakthrough. Other thing that I have mentioned before is to be original, to trust your ideas and to learn a lot. In my country, a lot of youngsters think that it’s not necessary to have a lot of basic skills, then you see the bad story telling. You see that they don’t understand the rules. The film is for the audience. They have to read the story properly. When you have just artistic expressions but nobody can understand that or you are technically so bad that film went wrong. They want a piece of art. But even in a piece of art you need to know the basics. Then when you have a story and everything is fine, you should look for a good producer. You have to know the rules of the game. It’s very difficult but it always pays off when your film is good and receives a positive respone. It’s the best award. Nothing can replace that.