The 34th FIFF Director Visited the Actor of the Cow 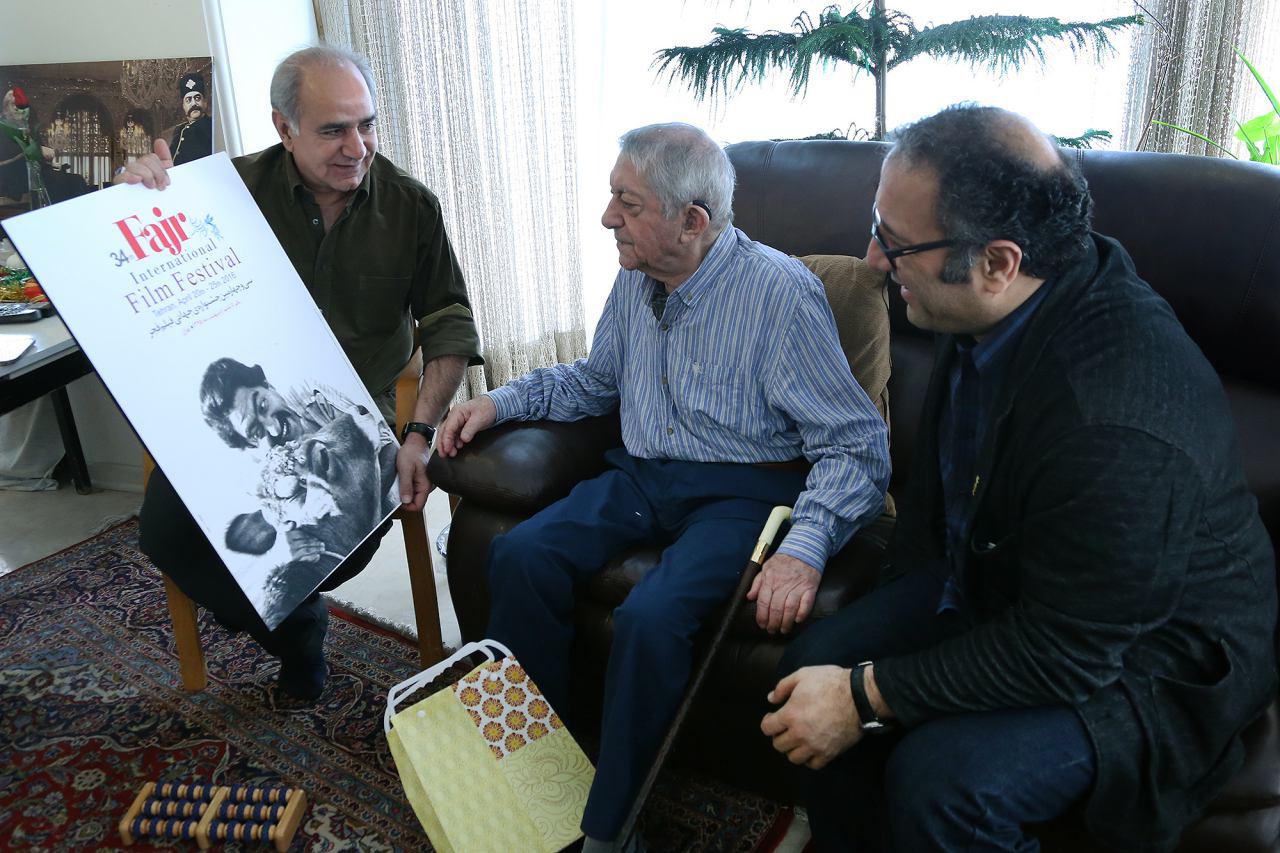 According to the Public Relations Office of the 34th Fajr International Film Festival, Reza Mikarimi, Director and Keyvan Kasirian Head of Communication and Media of the 34th FIFF along side with Parviz Parastouei, reputed actor, visited Ezatollah Entezami, the well-known and popular actor of cinema and theatre at his home. At this visit, the poster of the 34th FIFF was presented to Entezami.
At the beginning of this visit Mirkarimi pointed, “There were numerous reasons behind choosing The Cow film as the poster of the 34th FIFF. This film has won the first international award for Iranian Cinema for best actor and is considered as an everlasting and remarkable film in history of Iranian cinema. I intended to introduce a film to international audiences which is an honor for us.”
Mirkarimi added, “A corrected edition of The Cow will be screened with the presence of international guests and we would like to ask you to attend at this event.”
Entezami also appreciated the director of the 34th FIFF for choosing The Cow as the theme of the festival’s poster and said, “acting this movie, I studied the lives of cows to know more about them. One of my friends had a cow in his garden and I spent days staring at this cow. I spent a whole night next to this cow and studied its behaviors.”
He also referred to the memory of giving Simorgh Award to Parviz Parastouei for The Glass Agency film and said, “Parviz received his first Simorgh for Land of Lovers. He is a capable actor. He was incredible in The Glass Agency and his acting will be remained in memories. The actor must permeate to heart of the audiences and Parviz knows how to do it. His acting in The Glass Agency is remarkable . When you are acting with him you should be so watchful to be seen .”
Parastouei who co-starred with Entezami in One Flew over the Cukoo’s Nest also said, “I have a memory from the time when I was acting in Fly Over the Cukoo’s Nest which shows the way Mr. Entezami looks at his career. Once Ms. Karimi, Mr. Nasirian and me had shooting of a scene at 7 in the morning while Mr. Entezami was free at that day, but I saw that he is at the location in the early morning. I asked him why he is there that early and he described that he is there to see Mr. Nasirian’s acting because this character and his behaviors are so important and he said, “In one of the scenes of the film we are acting together which is the result of this one, so I want to see how he is acting this scene.”

The 34th edition of Fajr International Film Festival will be held from April 20th to 25th, 2016 in Tehran, under supervision of well-known Iranian filmmaker, Mr. Reza Mirkarimi, who is also managing director of Khaneh Cinema.