فارسی | English
41st Fajr International Film Festival > General > An Interview with Zeynep Atakan, Jury Member: There Is A Very Good Selection Of Films In The Festival

An Interview with Zeynep Atakan, Jury Member: There Is A Very Good Selection Of Films In The Festival 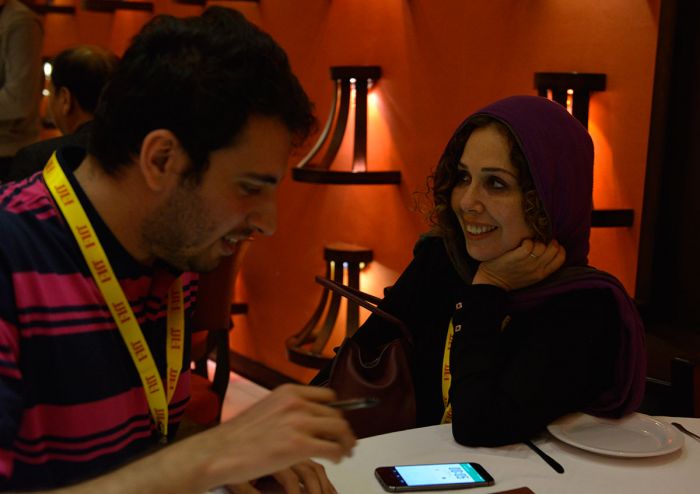 This interview was held in Ferdosi Grand Hotel before starting of reception in honor of international guests of the 34th FIFF. Zeynep Atakan was born in 1966 in Istanbul. After graduating from Marmara University, Faculty of Fine Arts Cinema and TV Department, Atakan worked as an assistant director and producer in the television advertisement industry from 1986 to 1999, and co-founded her advertisement production company in 1994. In 1999, she transitioned to the film industry and began producing international film projects. In 2007, Atakan founded Zeyno Film. In 2010, she won the European Film Academy’s Prix Eurimages European Co-Production award, and founded YAPIMLAB. Atakan has been the chairwoman of SE-YAP, the Turkish Guild of Film Producers, since 2011. Since 2014, she is the vice president of EWA, the European Women’s Audiovisual Network. She won the Bilge Olgaç Achievement Award at the 17th Flying Broom International Women’s Film Festival in 2014. Zeynep Atakan‘s last film is the Cannes Palme d’Or winner WINTER SLEEP.

How do you evaluate the films have you seen by now?

I am in the Jury and I have seen lots of movies by now in the festival. It is a very good selection of films and I am very happy that I am here. I cannot put comment on any of movies at the moment. The most I can say is that there is a good selection of movies.

How do you find the 34th Fajr International Film Festival atmosphere?

Since last year, Fajr Festival is held in two separated international and national sections. What do you think about the change?

How much are you familiar with Iranian Cinema?

I am a big fan of Iranian cinema. Iranian cinema is very realistic and I know many Iranian directors like Majid Majidi, Farhadi and Kiarostami.

Who is your favorite one among Iranian directors?

I really like Farhadi cinema and he is a very important director at the moment. I am the Turkish distributor of his last film, Forushande, so I will manage to release the movie in Turkey.

Do think there are similarities between Iranian cinema and Turkish cinema?

Yes, of course. They look really similar. The both concern for same issues in society and there are mutual cultural figures in Iranian cinema and Turkish cinema.

What is the specific figure of Iranian cinema?

I think cultural concept is specific element of Iranian films.

Nuri Bilge Ceylan is a popular director among Iranians. You are the producer of four films of him as Once Upon a Time in Anatolia and Winter Sleep. Please let us know about your cooperation with Bilge Ceylan.

It is great to hear that Ceylan is famous in Iran. I have been working with Nuri since twelve years ago and we made four films together by now. We knew each other even before starting to work together. At the moment, we are working on his new film and he has not chosen a name for it yet.

What is its synopsis?

Sorry, I cannot explain about the story at the moment.

How do you see global reception towards Ceylan`s films?

People all around the world like his films or at least we only heard positive critics and feedbacks.

It is your first trip to Iran. Have you walked through the city?

I had a little time today to go through Tehran. It is a fantastic city and I love it. I went to Bazar and Golestan Palace. The Bazar is very familiar for me because it was like Turkish Bazar.

Some critics believe cultural concerns could have negative influence on cinema. What do you think about it?

I think some cultural concerns are not important as a good filmmaker can make a good film at the end of a day.

Thanks for your time