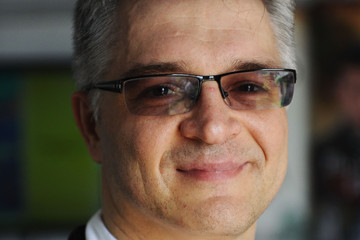 Igor Guskov is the programmer of Tallinn Black Nights Film Festival in Estonia. Last year, he attended Fajr as a jury member at the competition section. He has come to Iran to take part in Fajr for the second time. The public relations office of the festival had an interview with him.

Last year, in your first experience of attending Fajr, you were here as a jury member. This year, you have come back for the second time. How has your second experience been so far?

Yes, last year was different. I was here as a jury member. I work for a festival, called Tallinn Black Night Film Festival, which is an Estonian film festival. This year, I haven’t seen the films at the competition section. I have seen the Iranian market screenings. There are a lot of guests, who have come to Fajr, looking for interesting Iranian films to screen in their festivals. I search for films to screen at Tallinn Black Night Film Festival, and some films have particularly appealed to me. I’ve found the opportunity to talk to the festival team, who have managed to provide me with all the information I’ve needed, as soon as possible.

How has the atmosphere of the festival been different this year from last year?

All the changes made this year are absolutely important and actually they’ve all been changes for the better. Why? The answer is simple! Last year, the festival wasn’t badly organized. The hotel was located in a very luxurious neighborhood, but it actually was very far from the city center. We, as international guests, prefer to experience life among people. I like how the festival is organized this year because I’m getting to see people from different walks of life and that’s the kind of atmosphere cinema lovers, like me, absolutely adore. It gives me more and more energy to watch films. Last year, it wasn’t easy for everyone to attend the festival, yet this year, people from different parts of Tehran have been able to come to the festival venue. I myself, have had the chance to go walking in the city, and experience life among ordinary people even though I cannot speak their language.

What problems have you noticed in the organization of the festival?

I’d like to know your opinion about the films which have been selected for screening at this edition of the festival?

Have there been any films that you have particularly enjoyed?

I cannot tell you what films I have selected, because there’s a lot of competition going on at the market. You can find representatives from very well-known festivals, like Seattle, Palm Strings, etc. That’s a good point, though! Having invited guests from different countries, Fajr can show to the world that Iran is a country which supports art and particularly cinema!

Are you going to come back to Tehran for the upcoming editions of Fajr?

I hope I can come back! I’m sure those small problems I mentioned earlier will be solved in the upcoming editions. I hope you continue holding this festival for as many years as possible.

Yes, absolutely. The timing for the international section is very appropriate now. All Iranian cinema lovers can come to Iran if they receive an invitation.

What suggestions do you have for improving the quality of organization?

I think that would be a good idea to organize a big meeting through which the international guests could appropriately be presented since I see there are a lot of producers who don’t know us. There are a lot of producers who refuse to submit their films to the film market because they think they can get a better chance at presenting them elsewhere, but if they know there are representatives from different festivals worldwide, their films will at least be shown somewhere. So I guess that meeting I suggested would be a good solution. I’d like to meet people and listen to them, and I hope this problem will be solved next year.

And the Film Market? Is it appropriately organized?

I just demand one thing. I think there’s one piece of necessary information missing from the catalogue. I need to know where to find the representatives of the film at the Film Market.