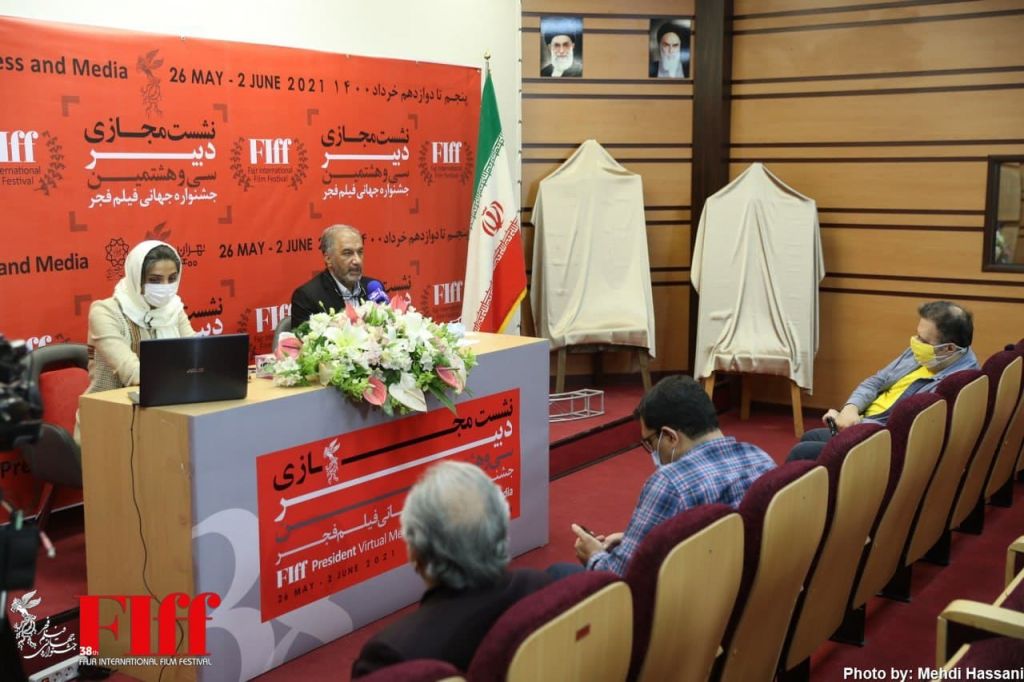 On Sunday, May 9, Director of the 38th Fajr International Film Festival Mohammad Mehdi Asgarpour held a virtual meeting with the press and media to detail this year’s online-only version. He was accompanied by the festival’s Media and Communications Manager Somayeh Alipour.

Asgarpour said FIFF decided to adapt its format for this peculiar year amid the pandemic as with other international film events: The pandemic and the subsequent disruptions changed everything for the organizers. A pivot to virtual was the only option to host international festivals, in order to provide industry professionals numerous business opportunities, support international visibility, and serve as a gathering place for those looking to discover the latest industry innovations and first-timers. We had to explore the potential for virtual solutions to avoid another cancellation.

The veteran Iranian screenwriter and film director added: FIFF was the first to be affected by the global pandemic in 2020. We still had plans to hold the event in new dates. The idea was to hold it before summer as no one knew what the second half of the year might bring and whether it would be possible. As scores of festivals had already cancelled their dates, FIFF hovered in uncertainty as well. We faced a strong situation and we fought until the last minute.

Asgarpour reminded the press how the organizers ran out of options as plans became untenable: But we didn’t stop there. We began adapting to the new environment, to address the possibility faced by many festivals: the prospect of an online version to replace the real one. We came up with virtual platforms for this year and attained valuable experiences along the way.

The director of FIFF went on to state that the secretariate was in charge of exploring the potential for virtual solutions: This included selecting international movies and following other major events. It took two years to choose the ones that are to be screened in different categories. Some of the movies couldn’t be selected as they had already been screened elsewhere. The solution was to review nearly 1,000 movies.

According to Asgarpour, a number of categories have been cancelled: We have no international guests in person and those invited will take part in virtual meetings and dealings. This includes the Film Market. We launched the Film Market Online to support the industry and help professionals. The online-only version is intended to mimic the market experience with live and real-time meetings.

He said Cannes film festival organized a similar online-only market hosted on the film industry platform Cinando: We are using the same platform this year. There will be 60 packages for presentation on this platform and nearly 400 agents, experts and guests are expected to take part. They will discuss to acquire rights to films across a range of categories. Iranian cinema will be represented as well.

On film workshops he said there will be online workshops in collaboration with top film makers, screenwriters and directors from all over the world. The organizers might also turn to the nostalgia of outdoor theaters as a safe entertainment option amid coronavirus and social distancing orders.

According to Asgarpour, FIFF is still a festival for first-time directors: First-time directors will get the chance to compete for top awards and even take part in the online Film Market. Iran is known as the paradise of first-time film makers in the world. FIFF is also one of the top-rated festivals by the FIAPF. However, there are no programs this year to pay tributes to the industry veterans.

In conclusion, Asgarpour reminded the press how the coronavirus pandemic upended the content pipeline, halting Iranian film production and closing cinemas. He maintained that normality should resume and production has already restarted in Iran as the industry has adopted remote-work protocols where possible. He said the virus still creates uncertainty and the biggest short-term risk seems to be consumers’ dwindling confidence in physical venues. He said the Iranian film industry is experiencing significant change. However, present disruptions only accelerate a transformation well underway in movie production, distribution and consumption.

At the end of the press gathering, the organizers unveiled the official poster for the 38th Fajr International Film Festival, setting the early tone for the event as the Iranian capital is getting ready to welcome the annual festival on May 26-June 2. The posters were designed by graphic designer Hamidreza Bidaghi.