Festival Director Welcomes the Press: We’re Not Afraid of Criticism 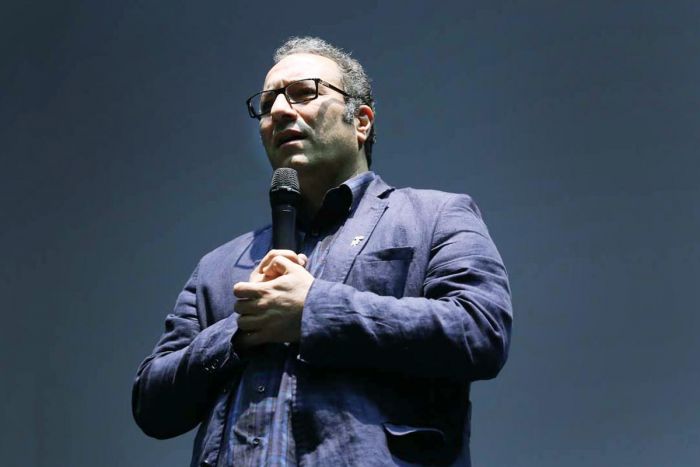 Visiting the first screening of the Fajr Internatonal Fim Festival, the festival director urged the press to watch works which are quite diverse and have been rarely seen.

According to the Public Relations Office of 34th FIFF, Reza Mirkarimi, the president of the 34th Fajr International Film Festival, visited the first screening of the festival and talked to the press. After apologizing for the delay, he welcomed the press and stated that if we like to have a festival with international standards, we have to care about those standards, such as being on time and following the rules. We tried our best to provide you with a quiet place to watch the films. Yet it is still possible to face some faults in our plans. We are not afraid of criticism, and are hopeful that with your help we can have an organized and standard festival.

Mirkarimi added, “we planned everything in a way to provide a desirable place for the press to watch movies. That is the reason we decided to screen movies for the press in the morning, because there is less crowd at that time. Considering the fact that many people are going to come to watch movies in the palace, we hope we can control the large number of people, 3000, who come to the palace and we can have a safe and desirable atmosphere. We have guests from foreign countries and it is really important how they are going to remember us and the festival.”

He also stated that you are going to see movies for different tastes in the festival. As a professional festival goer I can guarantee you that all the movies in the festival are very qualified, and that is a privilege for any festival. We also have some rarely seen movies, and some other works which are very diverse considering their form, geography and continent.

Mirkarimi continued, “I asked Ashkan Khatibi, Executive Director of FIFF, to be very strict about the comings and goings in the palace and also the discipline of the festive in the whole. Some of us might get upset for a while, but after a while we get used to the order. I really hope that with your help, we can make this festival a great event in the region. The goal of all of us is to have a desirable and standard festival, and I hope you help us to achieve this aim.”

After the president’s speech, Keyvan Kasirian, Head of Communication and Media, explained the process of receiving tickets for the press and then the movie “Majnoon” was screened as the first movie of the festival.