What Happened in the 1st Press Conference of 34th FIFF 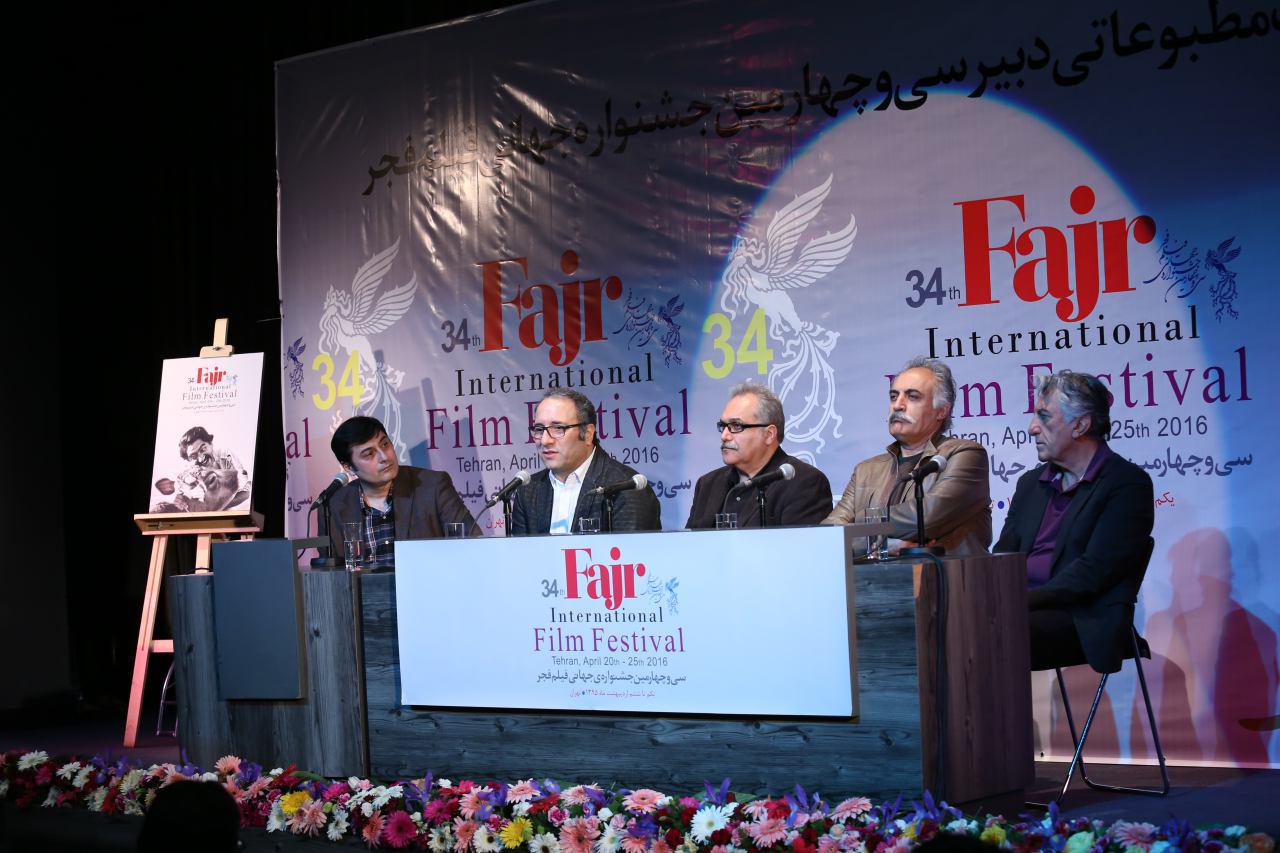 From Green Festival to a Venue in the Heart of Tehran

According to the Public Relation Office of 34th FIFF, the first press conference of Reza Mirkarimi, the director of the 34th Fajr International Film Festival was held today, Tuesday March 8th at 10 a.m in Hall #2 of Charsoo Cineplex.

In the beginning of the conference, the director of the FIFF said, “It’s not possible to hold an international festival without primarily seeking national goals. We cannot achieve our goals if we neglect our national aims. We’ve been trying to present the Iranian cinema as a strategic commodity.”

Reza Mirkarimi, said: “This position had been offered to me months ago, but I wasn’t interested in taking it. I wouldn’t have accepted this offer unless I could leave an impact on our cinema.”

He added: “We know that there will be some problems throughout. Some even were not sure whether the festival could be held or not. At first, I tried to set up targeted programs for the festival. Who is the audience? Why do we hold this festival? Are our programs in line with the taste of our audience? Is this program going to take us to where we want to get?”

Mirkarimi also emphasized, “In order to achieve our goal, firstly, we had to study the previous editions of the festival. This happened throughout different meetings. On the other hand, the international section has been separated from the national section and it’s been being held within a different time span. It seems to me that holding these two sections separately seeks a particular purpose and more movie lovers and researchers will be attracted to this event. We have also been trying to eliminate the luxurious aspects of the festival.”

He later stated: “I daresay the Iranian cinema could be considered international. This makes our cinema superior to other cinemas, so we don’t need to give any privileges to our guests. I had predicted that there would be no need to negotiate with the guests regarding their attendance and not surprisingly they’ve mostly welcomed our invitations.”

The director of FIFF pointed out that in order for the festival to become more scientific and specialized, they have considered inviting particular guests and screening particular films.

Mirkarimi also mentioned that teamwork could be handled well in Iran and added: “Since day one, I’ve wanted to have teamwork, and I’ve asked everyone with international experience to help me achieve my goal.”

He said: “It’s not possible to hold an international festival without primarily seeking national goals. We cannot achieve our goals if we neglect our national aims. We’ve been trying to present the Iranian cinema as a strategic commodity.”

Mirkarimi also reminded that: “Festivals are organized and held by volunteer organizations worldwide. We’ve been trying to run such an organization so that volunteers could get involved in holding such festivals. We will design a website for students and anyone interested in this field. This is how we can have more contact with the young and also reduce the cost pf holding a festival like Fajr.”
Poster of the Festival Unveiled

The poster of the Fajr International Film Festival has been unveiled, depicting Ezzatolah Entezami in the applauded movie, “The Cow.”

According to The Public Relations Office of the 34th FIFF, the poster of the festival was unveiled in Charsoo Cineplex right before the first press conference of the festival.

Kianian pointed out that they would love it for Ezzatolah Entezami to attend the unveiling ceremony and indicated: “You’ll find out the reason after the unveiling. He couldn’t be with us because of his illness.”

After unveiling the poster of the festival which depicts Ezzatolah Entezami in the movie, “The Cow” directed by Dariush Mehrjui, Mirkarimi stated: “In a lot of festivals worldwide, it is common to publicize a film festival using a frame with such national impact. Moreover, the portrayal of celebrated figures on such posters could pay these actors tribute.

On the other hand, “The Cow” is an internationally acclaimed film and has also been endorsed by Imam Khomeini. It is worth adding that, this film has paved the way for the Iranian post-revolution cinema.”

Reza Mirkarimi the director of the festival explained about a new award in the festival: “We had Mustafa Akkad Award in previous editions of the festival which was allocated to religious and moral values in films.”

“In this edition of the festival, Muhammad Al-Ameen Award will be dedicated to the winners which include religious and moral values for reflection of prophetic ethics and morality.” He continued.

In another part of the first press conference of the 34th FIFF, Amir Esfandiari, International Deputy of the festival talked about the qualities of the films, participating in the international section, and also the film market and its particular guests.

Amir Esfandiari mentioned, “Mr. Mirkarimi has focused on the quality of the films and not their quantity. Therefore, this year the festival will be focusing on the quality of organization and the guests also the services they will be offered. We have to be economical; however, we’ll invite prominent well-known figures to attend our festival. Fajr International Film Festival pays tribute to quality local and international films. It is an event that celebrates cultural exchange, displays creative achievements of highly acclaimed cineastes and showcases films promoting artistic contribution to the medium. Moreover, the festival also looks at films that seek justice, defend the oppressed and underline humane and moral values in this intolerant and dehumanized world. I also have to say that the festival focuses especially on films from the Middle East and Central Asia as well as works heralding peace and friendship as true teachings of the holy prophets.”

International Deputy of the festival also said, “Holding the festival right after the New Year holidays is a hard task, but we’re in a good state regarding our international relations. Among our guests, there are 4 celebrated producers, who will be holding specialized workshops about film production. We’ve also invited a screenwriting instructor and a well-known innovative cinéaste”

He added, “We’ll have two instructors from talent finding campuses, who will hold their workshops beside Maziar Miri and Dr. Hosseini. Overall, we’re going to have 170-200 international guests. We’ll have reporters from the important international press as well.”

Esfandiari also talked about the Film Market and said, “The 19th Film Market will be held this year. The film market has undergone many difficulties throughout the years, but we’ve been trying to turn this market into a distinguished market in the region. The number of participants has gone up and more people have asked to take part in the Film Market.”

He added, “I’ve been talking to Mr. Mirkarimi about taking a moderate approach and organizing a market neither too small nor too big.”

Cinema Salvation Lines Up with 15 Films

Reza Mirkarimi, the director of the festival said that we focused on reducing the sections.
“3 Iranian and 12 international films will compete in Salvation Cinema Section. in every session, a short film, an animation, and a documentary will be screened.” He added.

According to the Public Relation Office of 34th FIFF, the director of the festival stated “We still have Asia and Islamic Countries Section but it is not competitive while there are several awards in the side sections.”
“Golden and Silver Trophies will dedicate to the winners including best director, best screenplay, best actor and actress, and best artistic achievements.” Mirkarimi said.

Reza Kianian, Iranian acclaimed actor and Manager of the Festival Palace of 34th FIFF at the press conference which was held at Charsoo Cineplex in March 8th insisted that this edition of FIFF has special plans for supporting environment.

According to the Public Relations Office of the 34th Fajr International Film Festival, Kianian pointed, “There would be no daily bulletin since we are not about cut a single tree for this event. Information of films and festival is available within a mobile application for audiences. This edition of the Fajr will be a Green one. No flower would be cut as decoration for ceremonies.”

FIFF as A Chance of Exchanging Ideas for Film Scholars

Alireza Shojanouri said that the festival should not be just a place for watching films; it’s a venue for exchanging ideas and knowing about others’ thoughts and interests.
According to The Public Relations Office of the 34th FIFF, Alireza Shojanouri, Manager of Film Sessions and Meetings of 34th FIFF pointed that, “this festival is being organized by a noble team and this is because of Mr. Mirkarimi who collected this team.”
He added, “There is a belief that we Iranians are not good at teamwork but this edition of FIFF would be a demonstration of an effective teamwork. If we can cooperate with the press that has an influential role in this work there will be a remarkable positive result will be expected.”
Shojanouri insisted that festival is not just a place for watching films but can be a venue for exchanging ideas and knowing about others’ thoughts and interests and added, “International guests of the festival are film scholars and if we provide a proper situation for sharing ideas and knowledge then we can claim that we have organized a good festival. Although numerous good films are attending the festival but this cannot be the only reason for having a worthy festival.”
This film producer also expressed, “what encouraged me to accept this position at 34th FIFF was the chance of idea exchanging among foreign guests, I found it exciting and I am about to make it happen.”
Shojanouri pointed to the critical role of the press in organization of a festival and said, “Without effective presence of press, the festival will be just an event which we will recall it in the future. We should attract attention of audiences and bring them to the theaters.”
He also referred to the films’ press conferences and workshops and noted, “The filmmaker alongside with a cast will introduce and present each film before its screening. Then a press conference will be held with cast and crew to discuss about film production process and all.”
At the end Shojanouri added, “Having master panel discussions with presence of the festival’s guests and film critics also holding some special workshops in screening halls  are among special events of this edition of FIFF for interested audiences.”

The 34th edition of Fajr International Film Festival will be held from April 20th to 25th, 2016 in Tehran, under the supervision of well-known Iranian filmmaker, Mr. Reza Mirkarimi, who is also managing director of Khaneh Cinema.