فارسی | English
41st Fajr International Film Festival > General > An Interview with Stephan Foerner, the Interfaith Jury Member Any theme or subject can be the starting point for dialogue among religions

An Interview with Stephan Foerner, the Interfaith Jury Member Any theme or subject can be the starting point for dialogue among religions 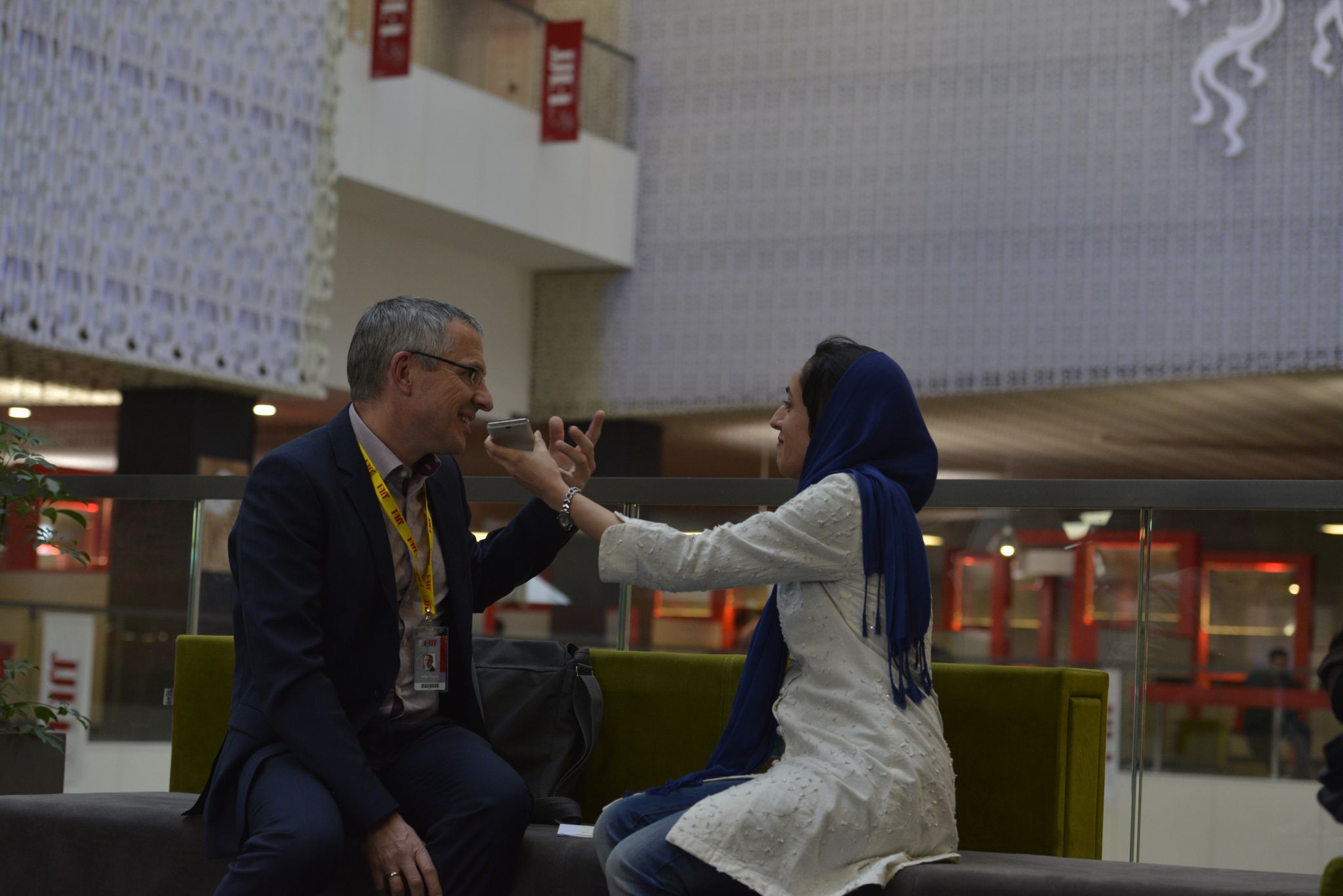 Stephan Foerner has been a member of Ecumenical Jury at various European film festivals, such as Cannes, Cottbus and Berlinale and has also been a member of the Catholic Film Commission since 1997. The public relations office of the 34th Fajr International Festival had an interview with him:

Mr. Foerner, would you please tell us about the general atmosphere of the festival and how you liked it?

What I admire is the great hospitality starting from the airport, when they picked us from the airport and everywhere when we met people, there was always a living welcome. Not just said but it’s done. And it’s impressive for me to feel really I’m a guest and it’s great to be invited here and to stay here for 8 or 9 days.

What about the venue? What do you think about the place the festival is being held?

I like this building very much. I think the wall there is a combination of modern and tradition as far as I saw up to now and it’s really marketplace and I was told that this was also called a Bazaar and I visited the old bazaar and this is really a renewed bazaar and to meet people, to trade and to have contact and to eat and everything.

As you know this is the second time the national and international sections of the festival are being held separately. Do you think it’s a good idea to hold these two sections separately and at two different times?

I’d rather have them together, because when I’m here in Iran, I’d like to know the Iranian cinema better and see the films that will never be shown in Germany or in Europe or elsewhere and that’s what interests me most. And I hope despite this separation I can see some Iranian films as well, not just the international films.

Regarding the section you are focusing on, the Interfaith Section, can you please tell us how cinema can be a media to promote humanity, justice and reconciliation? How do these two connect?

If you look around the world people don’t find a common language quite often, talking about religion, talking about values, for example. They don’t agree, because they have different vocabulary, different languages. Christians and Muslims always have different languages, but finally they talk about the same things, about values, about how to live together, how to respect the other, and I think watching movies and the pictures you see can be a kind of language and a way of understanding. You don’t agree finally in every single point, but that’s ok. There might be a compromise. There we can meet, and there we agree in the consequences, in how people act, and even if we don’t agree and believe that’s wrong how they act, still we can develop a kind of international language and I think everybody can understand films. Magali, for example, said I’d like to see as many films as possible, even if there are no subtitles. Even if I don’t understand what they say in Farsi, I see how they act, how they come closer or not, discuss, or they love each other. And this is so fascinating to me that without many words or by acting you can tell the story and you can come in contact. That’s why I like it and I find it extraordinary that we have Interfaith Jury in Europe, in Berlin, in Cannes and other European festivals. We have ecumenical juries, just Christians, Protestants and Catholics, although we also have Muslims in Germany, for example, and I think we should take them into consideration, to discuss with them and to watch films together.

And what themes do you think can be more focused on in the Interfaith Section of festivals, to establish a dialogue between cultures and religions?

I think every theme, every subject can be the beginning of a discussion and of an understanding, whether it’s about war or love or… they showed the film ‘The Cow’, something which is very valuable to him, it’s very important for him, you have to focus on these subjects, for example. So to me, every good film can be the starting point of an approach, discussing about values, about attitudes towards life.

What about the Iranian Cinema? How can the Iranian cinema contribute more to the international film industry?

To be honest, I don’t have an idea in its economic aspect. What I see in Germany, the most powerful productions with the most money have the best chance to be seen. Smaller countries even in Europe and with films with smaller budgets have greater problems to find an audience. That’s why festivals are so important. Also at the Berlinale, I’d like to see films from countries that I can never see in the cinema. In fact I don’t have an idea. It should be possible to see more films not only from Iran, but from other countries with great national cinema. Many films are never shown in Germany and that’s a pity.