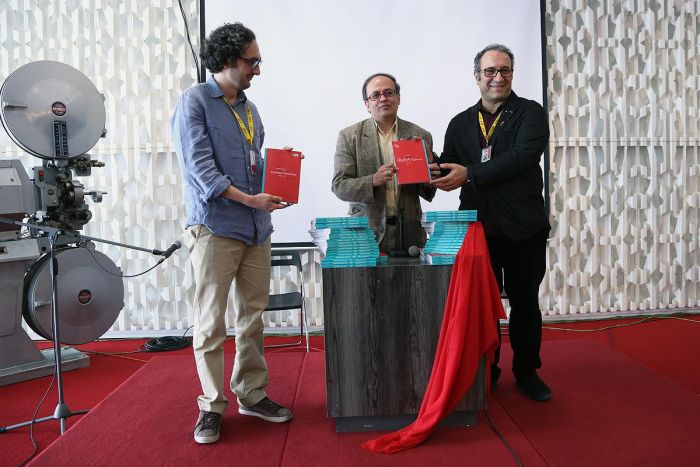 As reported by the public relations office of the 34th FIFF, the unveiling ceremony of “An Introduction of Global Sources on Iranian Cinema” was held on Thursday afternoon, April 21st at the Festival Palace.

At the beginning of the unveiling ceremony, the festival director, Reza Mirkarimi mentioned that this book was ordered to be written by the festival and said, “This book includes a list of sources, published abroad, on Iranian Cinema.”

He added, “Dr. Abolhussein Laleh, has worked on this subject, having been accompanied by a number researchers. Publishing this book has been a strong step for the festival. Moreover, Ms. Collin from Germany, who has previously written books about Iranian and Turkish Cinemas, has joined us here.”

Later in the ceremony, Abolhussein Laleh, with whose effort the book has been published, stated, “Iranian Cinema has an important place in the world of cinema; yet Iranian films shouldn’t be the only criterion for assessing Iranian Cinema. The culture founded under the influence of cinema should also be taken into consideration.”

He then added, “This book introduces about 80% of the sources published in English, Spanish, German, Turkish, etc. on Iranian Cinema. I hope, in our next step, we can collect about 200 theses on Iranian Cinema and the third volume will probably include about 300 articles.”

Dr. Ozgu Yaren from Turkey had also attended the unveiling ceremony. Regarding Iranian Cinema, he said, “In the late 80s, almost after the Islamic Revolution, Iranian Cinema took a different unique approach. The discourse of Iranian Cinema makes it sound unique to us.”

He later added, “Nowadays, everybody is familiar with Iranian Cinema’s atmosphere. When you watch Iranian films with a critic, you’ll know what to expect. Iranian Cinema has a universal character and identity and has reached a place which is not easy to reach.”

Yaren called “The Introduction of Global Sources on Iranian Cinema” a main source about Iranian Cinema and said that writing this book was a major step.