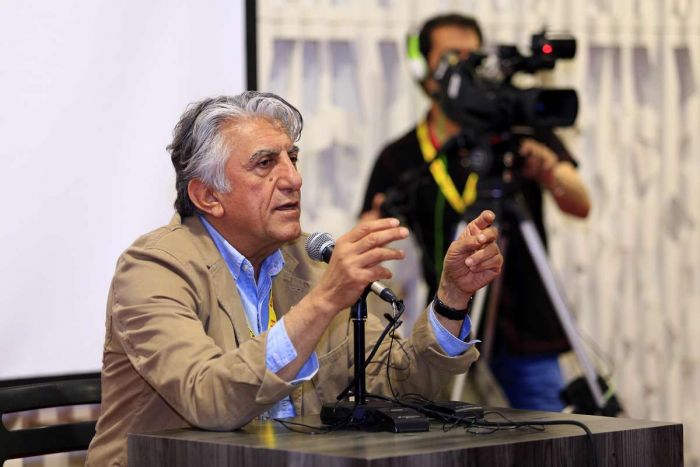 Reza kianian in his Darolfonoun workshop described different acting techniques in the world of acting.

According to the Public Relations Office of the 34th Fajr International Film Festival, Reza Kianian in his workshop, “techniques of relation between actor and director” said, “an actor, a director or any other artist should be able to analyze all the details about his created work so that he can get free and comes out from the world he used to live in it.”

He mentioned “The Exorcist” and added, “in fact we are all exorcists. We are the one who removed jinn from the girl’s body. This is what critics should do for us but we do it ourselves. But if an artist cannot be able to get rid of his previous role, he will remain in the same role in rest of his life.”

He elaborated about every-role actors and stated, “Those are actors that when we name them there is no specific persona in our mind, actors like Kevin Spacey, Meryl Streep, Tom Hanks are among these actors.”

Kianian also categorized the actor’s body in four types and said, “all of us would be limited to some parts of our bodies, but the actor who is able to apply the fourth part of his body, namely his mind, can analyze himself.”

The writer of “Magician in Acting” said, “I wrote a sentence on the cover of my book which is Acting is not life, it’s a performance. Because we are not living in films and we know everything about the camera angles and light and everything.” He described the power of logic as a third eye which is drawn on the forehead in India and insisted that, “you have to empower that eye and when an actor knows about this concept the relation between the actor and director will be formed.”

At the end he replied to a director’s question and said, “If you know what are you exactly doing and believe in your work you would have a self confidence that no one can get it from you. But if you don’t know what is about happening you will be afraid if everything.”