فارسی | English
Fajr International Film Festival > General > Report of Asghar Farhadi’s Workshop//The More Local A Film Is, the More International It Will Be

Report of Asghar Farhadi’s Workshop//The More Local A Film Is, the More International It Will Be 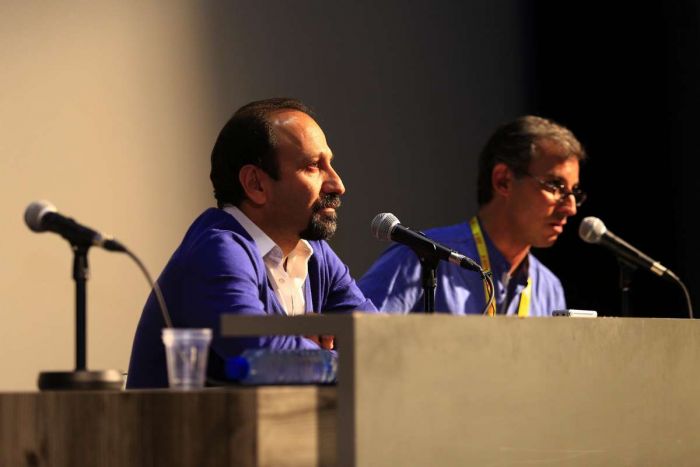 Oscar winner director, Asghar Farhadi gave his lecture in Darolfonoun workshop about narration in cinema, characterization and the joy of filmmaking.

According to the Public Relations Office of the 34th Fajr International Film Festival, Asghar Farhadi, director of the Oscar winner film, “A Separation” attended in Darolfonoun workshop on Thursday, April 21, 2016. At the beginning of his speech Farhadi said, “before starting question and answer session I should remind that our cinema owes to many people that I would like to name them right now, the one who I have inspired by him a lot and is sick now. I hope that we can send good energy to Abbas Kiarostami for his health and next year he holds his workshop here with us.”

Farhadi Appreciated Mirkarimi’s work for organization the 34th FIFF and said, “I should thank Reza Mirkarimi and his team for this well-organized festival. This is the first Film Festival after the revolution that is organizing in real international level. ”

Farhadi also answered the questions of the workshop attendees.

He was asked about how he gives the audiences information in different parts of the film and answered, “there are some types of information that we release. One part progresses the story and one part gives information about the characters and help them know characters. The main point in both types is that how much information we give to the audience and when to give them.”

Director of “About Elly” commented about the process of turning an idea to a script and said, “An idea which comes to the mind tonight and you make it next month cannot be a good one. The idea that comes and remains for years must be made. Once I saw a picture in which a person was standing on the beach all wet and looking at the sea like he has lost someone in the sea and is waiting for the corpse. I saw this picture when I was 23 and I made “About Elly” when I was 36.”

He continued, “in this phase, you should ask questions about different aspects of the story, who is the guy in the beach, why is he sad, who has drawn in the sea, what is their relationship. Writing the story, you should keep asking questions. You should be two persons, one who asks and one who relies. Your conscious personality asks and your subconscious replies. So do not think about your answers because they come from your nature.”

He also defined relation between events in the story and said, “when I start a story there are irrelevant scenes in my mind or I just write some sentences. Sometimes for example my subconscious says that I want to see a scene from a school class or see a man washing his father in the bathroom. There are some contradictory scenes and I omit unimportant parts.”

Farhadi added, “These techniques are five percent of the work and the other 95 percent happens inside each person which is indefinable.”

He also talked about the elements that form the tone of the director and stated, “if you want to make a film that claims that it is a true story and not a fiction, your tone should be changed. Since I care about daily life my tone in films also goes to the daily life.”

Farhadi also described about characterizing and expressed, “I learned through experience that there are two ways for characterization. There are Action or relation characters in films. I have learnt that I should put my characters in reaction position to introduce them to the audience. In “A Separation” we know about the characters through their reactions.”

He elaborated the difference between accidents and incidents in his films and joked, “there is no different. In Tehran people call it Accident and in smaller cities people call it incident.”

Farhadi answered a question about sub-plots and added, “there is a factor that if we remove sub-plot and we miss nothing from the main plot we should do it. The sub-plots are like puzzle pieces and form the plot all together.”

He replied a question about camera movements in his films and said, “There is a simple formula for me. When you practice a scene with the actors you come close and go far, when after sometime you find that you are standing on a specific spot more than others that is the right place of the camera.”

He pointed to the things that should be avoided in filmmaking and said, “never do something that you don’t like even if you are given the best awards. If you like to make sad films, do it. Our life is short, and there are just two filmmaking styles. In this short life, we can either enjoy our films or being a filmmaker.”

Farhadi continued, “I just use dialogues that have used before or heard from someone. I would never write a dialogue that never used in my own life.”

At the end of the workshop, Farhadi concluded that, “I enjoy filmmaking. When I finished “A Separation”, I told my crew that if the film finishes even right now it is not important because we enjoyed enough from making this film.”