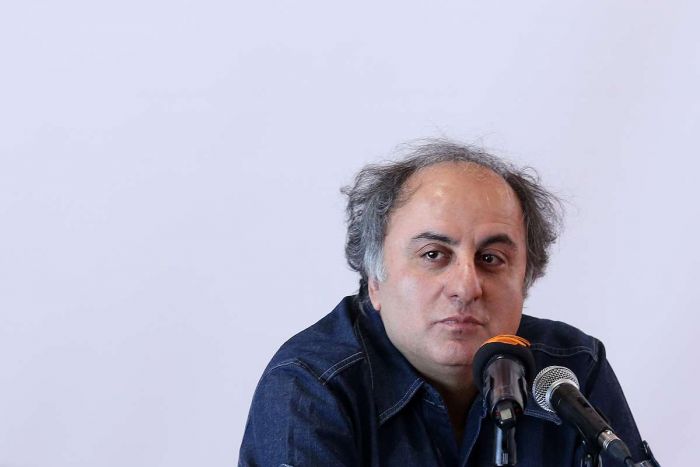 The Iranian leading director, Mohammad Ali Sajjadi, believes that the main problem of the Iranian cinema is focusing on the epigram and the theme rather than the content.

According to the public relations office the 34th edition of Fajr International Film Festival, Mohammad Ali Sajjadi has shared his experience of the cinematic techniques with the students at his workshop, which was held today, on the 3rd day of the 34th FIFF, at Darolfonoun.

He asserted that regarding my thirty-year experience of teaching cinematic techniques, I would love to be able to share a part of what I have gained all these years with the audiences of this workshop.

He insisted on following the special rites of watching a film and added that the most important thing to be considered by the students is to watch a film considering the rites of watching it, as he believes that the way that a student of cinema watches a film should definitely be different from that of the common people. Sajjadi said: “I have noted this fact in order to remind you of not considering a film as a common one while watching it.”

This Iranian Director stated that judging a film at the level of learning is so poisonous, and added that it is possible to learn some points from any kind of movie regardless of their quality. He said: “The fact that you are not interested in a special genre of films should not stop you from learning. You should rather focus on the filmmaker’s ability to convey his message.”

Sajjadi pointed that even if we are not interested in a film we should avoid being prejudice as one might find some scenes which should not be ignored.

The Iranian filmmaker believes that the biggest problem that the Iranian cinema is facing today is merely focusing on the theme which results in being misconduct, but fortunately the young generation of the filmmakers pays more attention to the form and content. It is of high importance how to develop an idea, how to film it by the camera, how to capture the moments and the visage forming the film. Techniques and methods of making a movie play the role as the regulations in driving; as we start driving as a beginner we pay attention to the gear and the clutch, but as we get more experienced we shift our attention to how we drive, this is exactly how we learn to make a movie.

Mohammad Ali Sajjadi referred to the film‘Body’as an example of a simple film which flourishes a simple idea by selecting the right angles of camera while filming it. He also mentioned the suitable scene selection of the film ‘Hasti’ in order to highlight the same idea in cinematography.

Pointing at the short films, Sajjadi said that there is no fixed way of making it as each short film might have its own structure.

At the end of his two-hour workshop Mohammad Ali Sajjddi concluded that we are in need of the new experiences in the Iranian Cinema, in this respect we should take into consideration the fact that if one is not familiar with the history of cinema, he might face so many difficulties as there is no experience if there is no tradition.