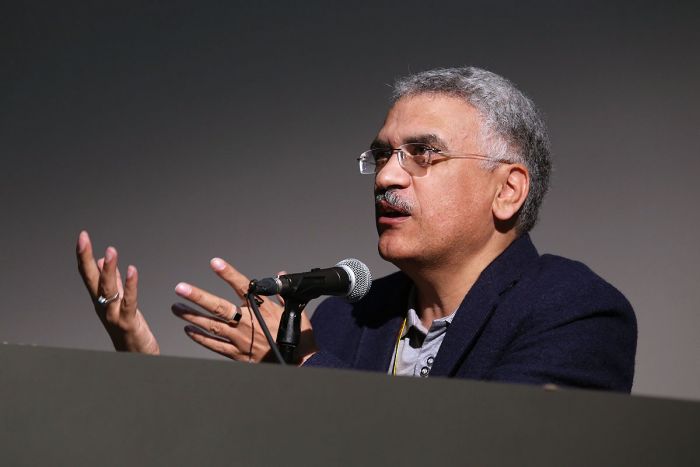 Majid Eslami briefly reviewed international cinema from the 60s till now, at the Darolfonoun Section at the Festival Palace on Saturday, April 23rd.

According to the public relations office of the 34th FIFF, Majid Eslami, film critic and cinema instructor, reviewed prominent international cineastes’ filmmaking approaches on the fourth day of the festival, Saturday, April 23rd.

He also referred to the momentous filmmaking movement in the 70s and maintained, “There were two approaches in the 1980s; on the one hand, a dominant movement from the 70s, emphasizing commercial films’ production, was still popular and on the other hand, a new movement was arising as an alternative.”

Referring to the films made in the 90s, Eslami said, “Everything changed in the 90s, but the change became apparent at the end of this decade. A new generation of filmmakers arrived and Modernism moved toward Post-Modernism.”

He asserted, “In cinema, Expressionism is accompanied by ambiguity. The 60s’ cinema moves toward universal ambiguity and encourages the audiences to interpret. In the 90s, though, cinema leans back toward story telling.”

Eslami also mentioned Woody Allen’s films and said, “Woody Allen made serious dramas in the 80s. Later on, he made films with themes fluctuating from serious to comic. The 90s’ films’ tones were not recognizable and the audiences started feeling differently from the past. The audiences were neither the elite, nor the public. For instance, you don’t know whether “Dead Man” is a sarcastic comedy or a serious drama.”

He finally said, “However, most of the prominent filmmakers of the 90s haven’t been successful lately. For example, Jarmusch’s last 2 films have been disappointing and Kiarostami couldn’t meet people’s expectations after 10 years, either. Besides these big names, you see some new names arising. A filmmaker like Nuri Bilge Ceylan emerges, with numerous good films in his filmography – a filmmaker who doesn’t follow the same pattern in his filmmaking style and changes according to the material he has in his disposal.”