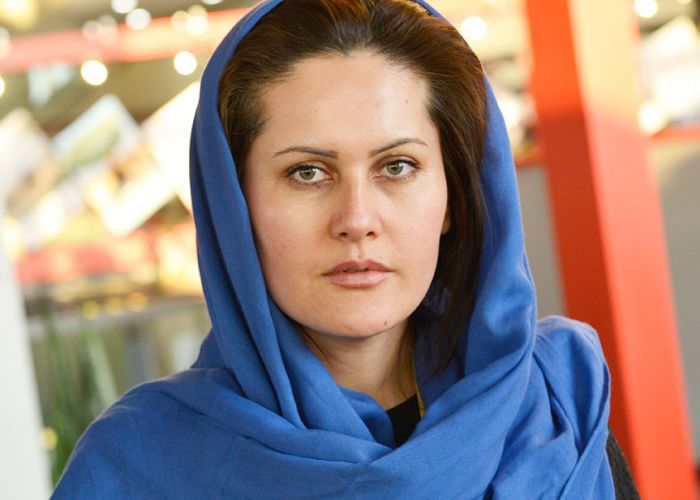 Born in 1984 in Kabul, Sahraa Karimi grown up in Tehran. When she was 17 years old, she immigrated to Slovak Republic, where she lived until the age of 28. In 2012 she returned to Kabul.
Sahraa Karimi has received her PhD Degree in the field of Cinema (Fiction Film Directing & Screenwriting)from the Academy of Music and Performing Arts, Film and TV Faculty in Bratislava, Slovakia (FTF- VSMU). She is the first and only woman from Afghanistan, who has a PhD degree in the field of Cinema. She is also the only Afghan filmmaker, who is an active member of Slovak Film and TV Academy. Karimi has made around 30 short fiction and documentary films in her filmography, which she directed during her study in FAMU & VSMU from 2002- 2012.
Sahraa Karimi is also the winner of many important international Film awards such as, Bilbao Int. Documentary and Short Film Festival, One World Doc. Film Festival, Sole Luna Film Festival, Morodas Doc, Slovak National Film and TV Awards, DIDOR Film Festival, Tajikistan and many other significant film festivals around the world.
Her film “ AFGHAN WOMEN BEHIND THE WHEEL” got about 25 prizes from important film festivals around the word and her film “ LIGHT BREEZE” won an academy award from Slovak Film and TV Academy as a best short fiction film.
She is now working on her feature film project “A PIANIST FROM KABUL”

This is your first time participating in FIFF. Did you have a background about the festival before accepting the offer?
Fajr Film Festival is one of the oldest festivals in Iran, and since I lived here until I turned 17, I clearly remember that the festival was always held in February. However, in the last two years, the national and international section have been divided. Fajr Festival is part of the cultural heritage of Iran, even though I have never participated in it before, and when I lived in Iran I was a child and I could not attend the festival.
What motivated you to accept the offer to be one of the members of the Jury Panel?
The fact that I was familiar with the festival back when I was a teenager was the main reason. Also Fajr Film Festival and Iran’s cinema have a very respectful position throughout the world. Moreover, you have to keep in mind that I am representing my country, Afghanistan, and our mutual language and culture was another factor that motivated me to be part of this festival. I am sure that I will be watching good movies here and will be introduced to films from different cultural backgrounds. The section that I am part of its jury panel is called Asian and Islamic Countries (Eastern Vista), which I am positive will be an interesting section with many different and unique films from many directors.
As you mentioned you lived a long time in Iran, so you must be very familiar with Iran’s cinema. Is that right?
I am quite familiar with Iran’s cinema. I always follow the news from Iran and its cinema. I even worked on Dariush Mehrjuee’s movies on my doctoral thesis. I focused on those movies of him that were focused on female characters and analyzed how he was influenced by the French New Wave. Interestingly, there is a photo exhibition in this year’s festival about his film “cow”. Generally, I follow the works of Iranian directors, whether novice or experienced. And I truly believe that Iran’s cinema has a lot to offer.
Since you are quite familiar with Iran’s cinema, and most of your films revolve around themes related to women’s lives, what do you think of the representation of women in Iran’s cinema?
I feel the approaches in Iran’s cinema have changed dramatically. In the past, most of the films had a social approach towards everything and the plots were all about social matters. Ten years ago, most of the stories in the films happened in villages or faraway places, but nowadays most directors are focusing on representing the life of a modern person in the urban area. Moreover, when the social aspects are pronounced, the importance of women’s perspective becomes more important. In the last decade, many women have been joining the cinema industry in Iran, and many of them have been quite successful. Women’s perspective in cinema is distinctive. When a woman wants to recount a story, if the theme of it is related to women, the female director will be attentive about not just the characters but the details of the story and movie as well.
Some believe that there is no difference between men and women when it comes to movie-making, but I, as a woman filmmaker, who focuses on women’s issues in her films, believe that women’s perspective is quite unique in cinema, it reveals the hidden layers of society which cannot be understood without the help of women. For instance, there is no doubt that the themes and concerns of Rakhshan BaniEtemad’s films is different from that of male directors.
Considering the fact that women are still regarded as a minority around the world, do you think that women should make movies in order to disrupt the male-dominated status quo or should they make artistic movies, regardless of the social responsibility that is expected from them?
I personally believe that directors, regardless of their gender, need to pay attention to artistic characteristics of their works. Yet, everyone who is part of a minority group, whether a woman or part of a political or religious minority group, unconsciously narrated the stories critically, and that is the result of all those shortcomings in legal, economical, and cultural aspects that minorities suffer from on a daily basis.
However, there is this general belief that it is only in Asia and East that women’s rights are being violated which completely false. All women around the world are struggling with similar problems and fighting to gain their rights.
Women directors, subconsciously, focus on subjects which are critically controversial, and I found this quite

refreshing that a woman artist can pay attention to details others may not be able to see, regardless of the genre and medium she works in.
Yet, too much criticism in everything is never good. A woman’s perspective, if too much critical, will not only improve the situation of women but will on the other hand stabilize the gender discrimination. I believe the answer is to look at a woman as first a human being, and then a woman. It needs to be understood that like every other human being she has human needs and will go through ups and downs in her life. She will have some good and bad characteristics just like anyone else. If a filmmaker pays attention to these things, he will surely find more interesting aspects to represent in his films.
Humans are complicated creatures, and in my opinion only when women are not considered solely as women, there is a chance to uncover the hidden layers of their lives. If we think of it as a humanistic subject, and consider the story as the story of a human being in a society, there is a better chance to have an appealing story. Also, when there is the scrupulosity and finesse of women, a masterpiece will be made.
What do you think are the similarities and differences betweenIran’sand Afghanistan’s cinema?
I do not think this is a good comparison, because cinema is part of the culture in Iran and has artistic, cultural and economic aspects. But in Afghanistan, we are still struggling with the consequences of war, and we do not get any financial support from the government which you do. Every film which is made in Afghanistan is financially supported by foreigners. Culture in our country has become a secondary concern, and due to political issues, no one cares about cinema and not even a dollar is given to cinema industry by the government as a budget.