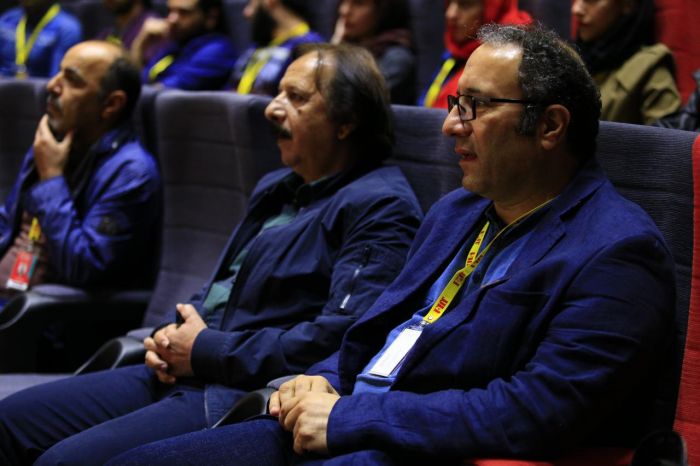 As reported by the public relations office of the 34th FIFF, the Darolfonoun Section hosted Majid Majidi, the prominent Iranian filmmaker at the very first workshop of the festival. In a hall full of attendees, Majid Majidi shared his filmmaking experiences.

At the beginning of the session, Head of the Darolfonoun Section, Maziar Miri, welcomed the guests and expressed his joy about the opportunity being provided for people from different cultural backgrounds to gather in one place, and take advantage of domestic and international instructors. He said, “There will be a prize for anyone making a creative work of art using their cellphone or camera.”

Miri called Majidi the one director whose name has unintentionally been tied to Prophet Muhammad and this is an honor for us Iranians.

After some rarely seen images of “Muhammad, the Messenger of God” were shown to the audience, Majidi said that the Darolfonoun Section was a precious experience and added that he hoped the festival could be an opportunity for sharing experiences with young cinephiles.

He said, “You just saw some images from my last film, the production of which took about 7 years. It was a huge project not only for me, but for Iranian Cinema since a lot of big names were involved in it. But now I want to tell you about when I started my career about 30 years ago. I made my first feature film in 1991 in Sistan & Balouchestan. I wasn’t interested in making “Badouk”, that’s why the producer asked me to pursue my documentary-making career. I felt I couldn’t say what I wanted to say through documentaries, though. He didn’t trust me and finally he agreed on producing this film with about half the budget was specified to films then.”

The 34th edition of Fajr International Film Festival is being to be held from April 20th to April 25th, 2016 in Charsou Cineplex, under the supervision of the well-known Iranian filmmaker, Mr. Reza Mirkarimi, who is also the Managing Director of Khaneh Cinema.