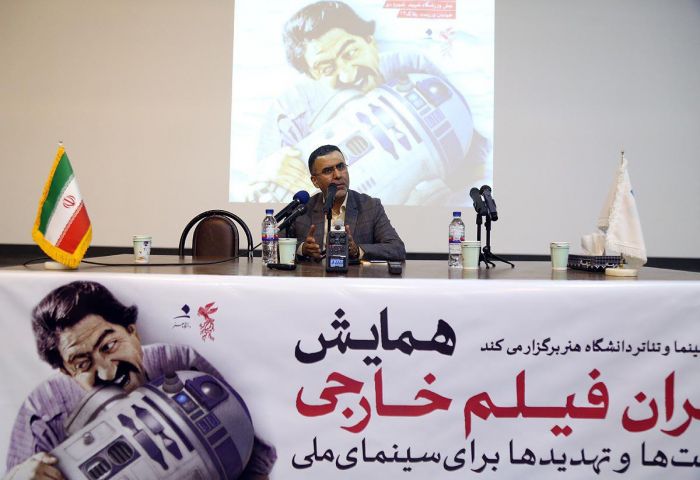 Head of Iran Cinematic Organization: “I, we deprived ourselves f we do not screen non-Iranian films in our country, so we should manage this in the way that alongside keeping our national cinema, we also screen non Iranian films.”

According to the public relations office of the 34th FIFF, in the conference of “Screening Non-Iranian Films” which was held on Sunday, April 24, 2016 in the university of Cinema and Theatre, Hojatollah Ayoubi president of cinema organization and Hessamoddin Ashna president’s consultants in cultural issues were attended.

Ayoubi said, “This feels good that I am in this 50-year faculty and seeing students working hard. I hope that I can be more with you. I promise I will attend in any programs that I feel I can be helpful.”

He pointed that cinema organization was the very beneficent of this program and stated, “Today, some statistics were announced that presented the rate of sell and audiences of some countries including Iran which Iran’s I should say wan not that updated and we have recently released the statistics of two years ago. I think the figures will be more optimistic using those statistics.”

President of cinema organization mentioned the growing number of audiences that has started in recent years and reached to 94 (from 74 to 94) billion Tomans and said, “in the first month of the year, films were sold 28 billion and that was a good energy and the growth of the audiences depends on many factors.”

Ayoubi pointed to screening of non-Iranian films in Iran and said, “Cinema organization has not reached to a defined policy about this but many researches have been done and we hope after these sessions we can come to decision.”

He insisted that we should not divest ourselves from the world cinema productions and added, “6000 films are made on each annually, and if just we consider 5 percent of it as valuable cinema, this is a remarkable number. Besides, cinema is not a ruining industry. We know that last year 7 billion cinema tickets were sold throughout the world and this shows that people love cinema.”

He also added, “there are a few screening halls in our country. When we are talking about Iranian cinema abroad they think we have lots of screen halls. However, our screening potential was about 50 films per year that it is increased up to 100 films thanks to art and experience group.”

Ayoubi assured that the government is supporting the screening halls and stated, “for example, in France the government uses tax on screening foreign films though it is about 50 years that French cinema using this and tries to keep its cinema against Hollywood. So films are screened in specific conditions but they also remind that the world cinema has a great power.”

He said, Fajr is the child of Islamic Republic and is the biggest cultural event in Iran. What is happening today in Charsou Cineplex is Islamic Republic’s proud. International guests are here and they feel peace and convenience and know that they are in the safest country in the world.

Ayubi continued, “We must make genius policies about cinema and consider the critical relation between the government and cinema. So we ask this fifty-year faculty to help us. Help us know how to use foreign cinema and at the same time keep our own cinema.”

President of cinema organization pointed to the VOD facility in the country and said, “We hope that we can increase cinema productions thanks to VOD systems.”

Gholamreza Akrami president of the Cinema and Theatre Faculty also gave a speech in this conference and said, “we hope that we provide required facilities for our talented students. It is surprising that this faculty which has been influential in cinema is being isolated and doesn’t have required facilities.”

Shahab Esfandiari, secretary of “foreign film screening” also stated, “may be it is believed that this conference is a formal one and its nor realistic. Because many of the conferences are just hold nothing happens after that.”