A Report of Mahmoud Kalari’s Workshop //Kalari; Photography Activates Mind and Is a Prerequisite for Pursuing Cinema 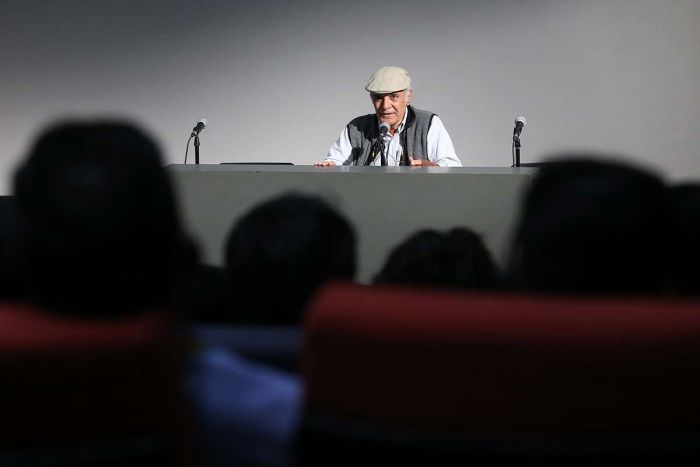 Mahmoud Kalari believes photography is a prerequisite for entering the cinema industry. He said, “Cinema students ought to pursue photography seriously and enter the world of cinema with a specific target.”

As reported by the public relations office of the 34th FIFF, the prominent Iranian cinematographer held one of the workshops of the Darolfonoun Section at Charsou Cineplex, hall one, on Thursday, April 21st.

Mahmoud Kalari pointed out that he had started his career with independent cinema and said, “Considering today’s circumstances and comparing today with the time when we were gaining experience, I can dare say, there is not a huge gap between you and us; however, we have undergone a lot of ups and downs.”

He continued, “The young generation of cinephiles can easily make films on their cellphones. They can simply take photos and record films on their gadgets, while we used to spend our childhood and teen years at Ray Coffee House, drinking tea and watching TV. We had a lot of limitations and that’s why I think entering the world of cinema is much easier for you now that it used to be for us then.”

Kalari stated, “What I mainly want to put an emphasis on is pursuing photography. I advise young students of cinema, who want to follow their cinematic career professionally, to initially pursue photography. Nothing can be as advantageous for them as photography.”

“Photography can activate their mind and train it for transforming live 3-dimensional images to virtual 2-dimensional ones. Strengthening your brain needs practice; therefore, you need to lean toward photography and gain something much more than technical points.”, added Kalari.