فارسی | English
Fajr International Film Festival > General > Ayoubi; Mirkarimi Can Be the Festival Director for As Long As He Wants

Ayoubi; Mirkarimi Can Be the Festival Director for As Long As He Wants 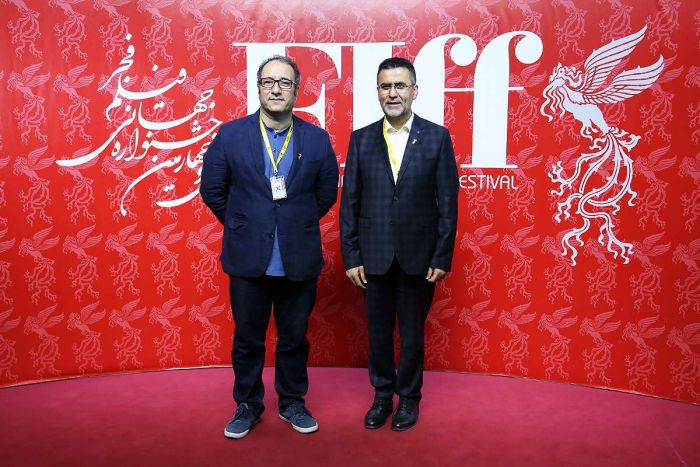 Head of Iran Cinematic Organization emphasized that Reza Mirkarimi will be the festival director for as long as he is willing to.

According to the public relations office of the 34th FIFF, Head of Iran Cinematic Organization, Dr. Hojatollah Ayoubi, visited the Festival Palace on the first day of this international event. During his visit, Ayoubi stopped by the 19th IFM (Iran Film Market) and the other sections of the festival and answered the journalists’ questions. He said, “Fajr International Film Festival is a cinematic event which brings those interested in Iranian cinema together in an elegant, reputable atmosphere to review those aspects of cinema which are closer to Iranian culture.”

When asked why he has an optimistic outlook on everything, Ayoubi said, “You have to try to be optimistic like me! That’s when you’ll feel self-content, and others will enjoy your company. You would accuse us of being optimistic, yet you can see for yourselves now, what a negative point of view you used to have. We have such a first-rate cinema with such good people and a country full of educated, sophisticated individuals. I’m a teacher myself and I’ve spent a large portion of my life educating young people at universities. I know what precious young forces we have and that’s why I look forward to the future and believe that better days await Iranian arts and in particular Iranian cinema.”

He also pointed out, “Although Mr. Sokurov is a Russian filmmaker, he’s asked me to invest more in Iranian cinema and do our best to protect and preserve it.”

Regarding the screening of international films due to the red lines and limitations, Ayoubi said, “Mr. Mirkarimi has seen all the films. We must know what films were presented to the festival and which ones were selected for screening. Needless to say that Fajr is a festival with primarily an outlook on Asia and the East, and a lot of regard for Iran and its neighboring countries. To the best of my knowledge, the films have been selected with minimum limitations.”

Head of Iran Cinematic Organization continued, “I’ve already had numerous meetings with the international guests. A lot of producers and film distributers have gained an opportunity to see Iran and Iranian films. We live in a world of communication, but we cannot solve all problems virtually. We need to see each other from time to time. The virtual world of communication is absolutely essential; however, all our international guests feel astonished when they travel to Iran and see how great we are for themselves.”

Regarding choosing Mirkarimi as the director of the festival, he added, “Mirkarimi is one of the most outstanding Iranian filmmakers with a lot of brilliant ideas. He is going to be the festival director for as long as he wants.”

Ayoubi also talked about this year’s approach of the Cinematic Organization and explained, “We’ve been attempting to double our to-the-point actions. We’ll be trying to finish our unfinished projects and pursue our good approach.”