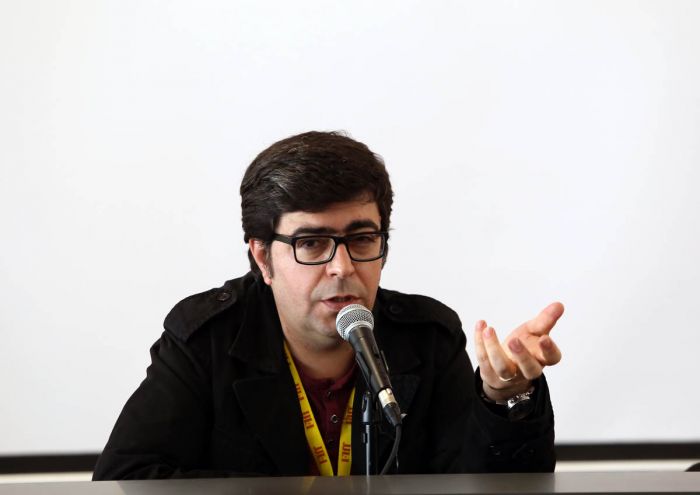 According to the public relations office of the 34th Fajr International Film Festival, attending the Talent Campus workshop on Saturday the 23rd of April, Majid Barzegar discussed independent and cheap cinema. “Independent cinema is a type of cinema which stands against dominant cinema. The point worth being mentioned is that independent cinema is not necessarily a type of cinema which is financially independent. There may be a filmmaker who uses government budget to make his or her film, and still stands against dominant cinema because of the novelty and creativity in their work,” Barzegar said.

“There is not as such specific definition for independent cinema throughout the world, but it is directly related to the culture, economy and society in a country. However, what is common about this cinema around the world is its creative reaction to form and content,” he added.

Stating that independent films comprise 10 percent of the Iranian cinematic productions he said, “I guess many of you, young filmmakers, will be among the people comprising this 10 percent. Meanwhile, in order to grasp the meaning of independent cinema, we first need to know dominant cinema well. Many filmmakers, due to lack of knowledge about dominant cinema, have a great start, but their debut is in fact their best work and they have nothing to say in future”.

“Here, the director is the main issue and has a major role,” he continued.

Criticizing the academic atmosphere, he pointed out, “During those four years, university instructors are so careful so that the students do not make a mistake regarding the lighting or other aspects of a film, but the instructors should ask the students to make that mistake. During these years, you are free to make mistakes and gain experience in making short films and the beginning steps of feature films. After 10 years you may become a great filmmaker like Kiarostami. Remember that just a person who is not afraid of cinema will become Kiarostami, someone who regenerates himself easily and without being afraid of anything,” Barzegar stated.

“In the 60s and 70s, we made 3 good films out of 10, now there are only 10 valuable films out of 100, so our cinema has not had a significant progression and only 10 percent of it has always been successful,” he asserted.

“There were people in the Iranian cinema who proved that they did not care about money, and still they could make good films. Shahid Sales made ‘Still life’ and Ebrahim Golestan established Golestan film and made great productions,” he continued.

“You should decide which group to be in. Experience shows that by joining the dominant group you won’t be as successful, since much capital has been invested in this section and it is not as effective as expected. If you would like to become a brand like Kiarostami, you should review these films to learn how to make one. You should make films with the minimum at hand,” Barzegar pointed out.

He added, “Our cinema is prone to dying young, as all the good things happen when the directors are not older than 35. So I hope you know how precious youth is”.