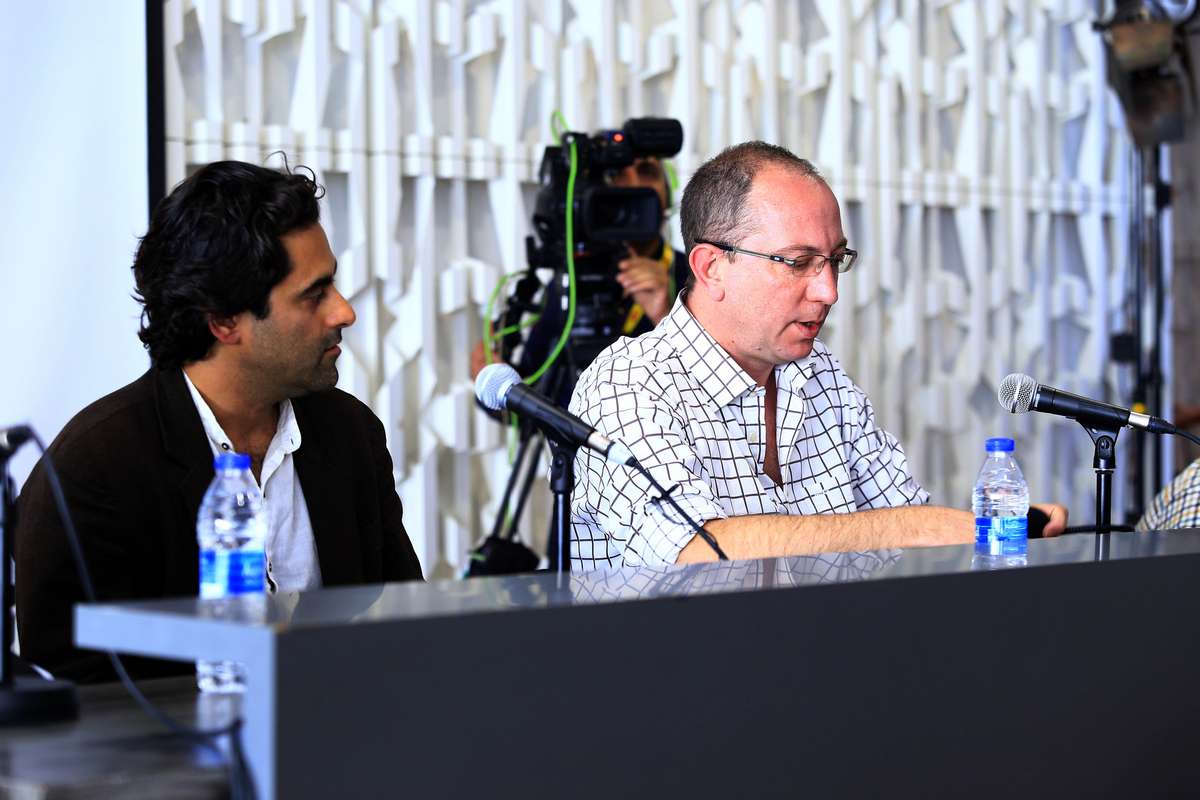 Guilllaume De Seille is a French producer and distributer who looks for young talented filmmakers all around the world. He had two lectures with Darolfonoun students in Fajr International Film Festival. In this interview, he talked about Iran’s cinema and his opinion about young Iranian filmmakers:

Can you introduce yourself first?

I am Guilllaume De Seille, a French producer and distributer doing non-French films for the last 15 years. I am an expert or specialist in young talents from all over the world.

Is this your first time attending Fajr Film Festival?

Yes, and this is my third day in Iran.

What motivated you to come to Iran?

The first reason is that I have never visited Iran. I like to go to new places, because mostly I go back to lots of places that I have already been there and after a while it becomes a bit automatic. I try to find fresh meat from time to time. Iran is an attractive territory because of its complicated and difficult context which is hard to be understood. I believe it would be easier in the next years. I have heard about Fajr and I am planning to do an Iranian film in the next 12-18 months.

How much familiar are you with Iran’s cinema?

Of course I’ve seen almost all the Iranian films which have been screened abroad.in Europe or especially France. It started with Kiarostami even before he was famous. And then of course many other directors came, and finally there was “About Eli” by Farhadi in Berlin. Actually I am afraid this is the problem I am having with Iranian films now, they have become too much like Farhadi’s movies and they are into social drama, nicely made, with a little bit manipulation. I hope the new wave of young Iranian filmmakers use the intelligence of masters with something more modern.

So you do not agree that Farhadi’s humanistic approach helped to get the attention of the international audience?

Well, 5 years ago it was fine, not now. Iran has this critical poetry which is its most important potential. To me, Farhadi is too gentle. There is going to be young filmmakers who find genuine authentic ways to portray the struggles of youth in today’s Iran. What I am hoping for is a critical social drama with a touch of Kiarostami’s style.

Can you talk a little about your lectures in FIFF? You had some comments about Iran’s cinema?

In general, I believe Iranian films are getting too gentle. The technical sound is used in a limited way, but it is still better than others in the region. The music does not work out, its use in the films is problematic. They are cheesy, sentimental and have a bad quality. Quality of sound is one thing, many use dubbing. Sound editing and sound mixing is not a problem. European companies always help in these matters when they have production. I believe if they do not music at all is much better. I prefer no music than a bad one. Acting is one the best in region, but there is still a bit of overreacting. Even art house turkey films are better in this matter. That is why I believe filmmakers should travel more. Young filmmakers are much better than the older generation. The older generation is still working with professional actors, and this might be the reason for the exaggeration in their acting.

You had some meetings with talented young Iranian filmmakers? Do you see any great future for them?

Yes. There is always potential in a country where they value cinema. And Iran has a history in cinema and it is recognized world-wide. I am sure the talents will not finish soon like what happened in Africa. From what I have seen, the youth have ambition, yet the ratio of experimental filmmakers in the young filmmakers is going to complicate things. Because it makes hard to help them and financially support them. There is no market for these films in general.

Isn’t this a bad news for experimental filmmakers?

Not really. Critics always help. Maybe a young experimental filmmaker should start with first making one or two experimental short films, but after that he will make a feature film which is not that experimental. This direction is good, but the other way around is not. It does not work like this. The more you get older, the less you use experimental devices or techniques.

Isn’t this in a way director’s giving up on his personal style?

No. most of the great directors that I love have done the same thing. They started with making very edgy films at the beginning. I am not saying I am afraid of meeting edgy Iranian filmmakers.

When you are looking for any collaboration around the world, what qualities are you looking for?

I don’t know how to answer this question. There is no rule. The film should be authentic and unique. It has to stand out.

How many films have you seen from the young talented Iranian filmmakers?

What are their basic concerns in their films?

What I liked the best about their films was the challenge. It is very complicated, working within the boundaries. Yet, they do it. Actually it helps you to become creative.

Do you think it is good thing?

These are exciting times, and I believe the younger generation is experimenting with the boundaries. What matters is that you have to play the game. Is there any other solution? What choices do they have? There is no alternative. The best strategy is to play the game while fighting the game. Everything will change eventually, I am sure. They just need to stay alive, practice, work, and get better.

So what do Iranian experimental filmmakers should do if there is no market?

It is hard, but if there is an experimental movie from Iran, if it is not Iranian enough, it is not going to stand out. I believe still that young filmmakers should not follow Farhadi’s path. It is not clever. What these young filmmakers are doing is more critical than Farhadi. They are harsher and more on the border compared to Farhadi. They are still discussing the social issues of the society but their approach is different form the older generation, theirs is more aggressive. It is not shown visually in their movies, but you can see it in their films. All in all, the young filmmakers have only one choice: to push the boundaries and be rebellious.