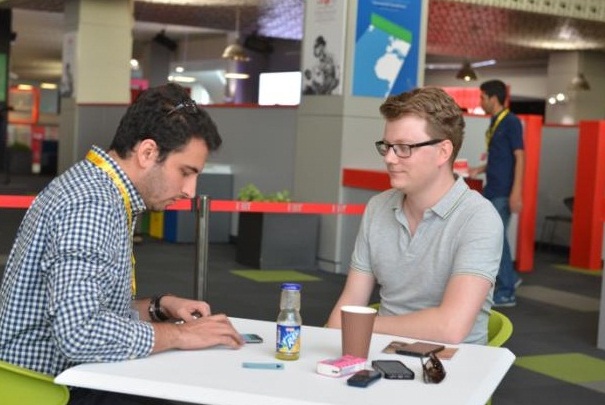 The Interview with Steve Reverand was hold in busy food court of Charsou Cineplex. Steve Reverand is a film Producer from France, but he is based in Prague. Steve has a production company in Prague. He knows Iranian cinema pretty well. He is the producer of Occasional Shower by Kaveh Danesh. The film is in Fajr International Festival.

What do you expect in the 34th edition of Fajr Film International Festival?

I am here to watch good movies and present the short film that I produced.

Could I know about your background in cinemas?

I started studying cinema in Prague 12 years ago. Then, I became a film editor. After some years of working in edition area, I moved to production section. I have produced short films, TV commercials and music videos. I have a production company, The Lab Studio, in Prague.

What did make you to switch from edition area to production? Are those areas separated completely?

I worked in edition for a few years and still get back to it from time to time but production area is something else. I would like to help young directors with new voices. I like to help them to present their ideas as their movies.

My company is helping of film festival of Iranian films. Through the festival, I discovered Iranian cinema and met Kaveh Daneshmand. He is an artistic director. I produced his first short film, Occasional showers. In addition, I have seen some movies from Ashghar Farhadi and Ali Mosafa. I have also seen some movies from young iranian director, new voices. I did like The Last Step by Ali mosafa. It was a great adaptation from James Joyce`s book. Moreover, I like cinematography of Asghar Farhadi.

Let us know more about the short film. What is its synopsis?

It is story of a family. They are in a road trip in a torrential rain. The family is on the brink of breaking apart.

The actors are Iranian?

No, all the actors are from Czech. Because of language barriers there were some setbacks during filming but at the end all things settled down very well.

How do you see the film? Is it more Iranian or Czech?

I guess mixture of the both. You should watch it. I rest my case

What specific figure does attract you in Iranian movies?

Their spectacular focus on screenplays is a common element. It is very interesting for me how Iranian directors tell a story with high details.

Yes it is my first time in Iran. I am honored to be here, a beautiful country. I arrived yesterday and going to stay here for one week. I visited the south and north of Tehran by now and I have one week to see the east and the west. The weather is nice. I heard that it is going to be rainy but it has been wonderful by now. Honestly speaking, everything is great, foods and people.

Thanks for your time Steve. Enjoy the rest.

Cheers, I will do.