Interview with Vahid Mustafayev, Representative of ANS TV and Radio Station in Azerbaijan Iranian Cinema Has Its Own Philosophy

Vahid Mustafayev the representative of ANS TV and radio station of Azerbaijan, Baku Film and Balance Group declared his point of view about Iranian cinema and the necessity of cooperation between Iran and Azerbaijan in cinema productions. According to the Public Relations Office of the 34th Fajr International Film Festival, Azerbaijani filmmaker, Vahid Mustafayev 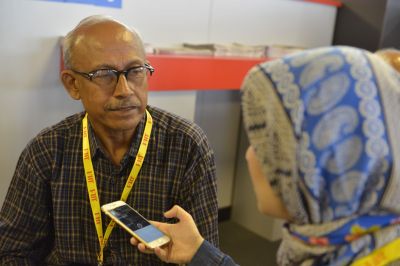 An Interview with Sanjay Kumar Datta, Indian Festival Programmer, at the 19th IFM There Are a lot of Common Themes between Iranian and Indian Cinemas

In an interview with the public relations office of the 34th FIFF, Indian festival programmer and joint secretary, expressed his joy regarding being present at Fajr International Film Festival for the fifth time and mentioned that the festival was being held more and more professionally year after year.   How many times have