فارسی | English
Fajr International Film Festival > General > Pouran Derakhshandeh at Darolfonoun: “I Can not Remain Indifferent towards the People’s Lives.” 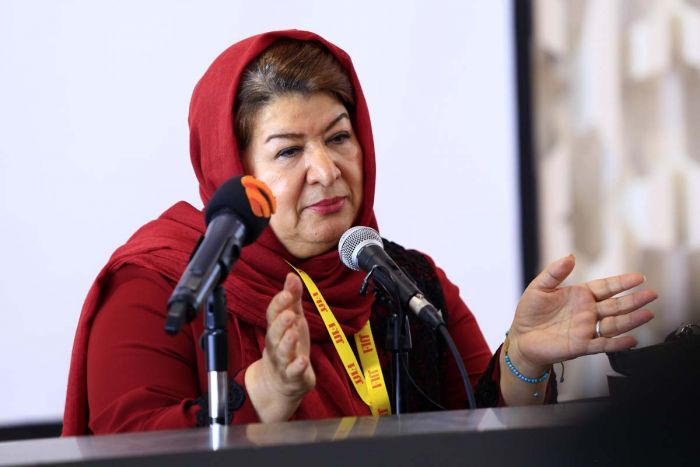 According to the public relations office of the 34th FIFF, Pouran Derakhshandeh, the well-known Iranian director, in a workshop at Darolfonoun on the 4th day of the 34th FIFF, April 23rd 2016, has thanked the programmers of the festival and referred to the FIFF as a chance for the young talented filmmakers to explore new ideas and learn more from the experts of cinema.

Pouran Derakhshandeh also claimed that at the time while she was an unexperienced young director, there were no such opportunities provided for the students of cinema to be in contact with the pioneers of the cinema, therefore she told the students to be grateful for being given the chance of being able to participate at different workshops and to be in close contact with the experts.

In her lecture, Derakhshandeh said that one should consider the filmmaking as a tough profession, you should put your heart and soul into it in order to be able to create a scene and show it to the world. Filmmaking is a like giving birth to a child which has its own difficult process.

The well-known Iranian director added that filmmaking is a window facing the world outside, a window that you have to open. No one is supposed to have seen the window that you are going to open as when you open your window you want to share the way you see the world with the others, to show whether there needs to be a change for the people living it to live happily or not, whether it is dark or bright.

Derakhshandeh highlighted the importance of finding the right subject for a film and added that the fact that how much we look for the right subject, how much we do research on it and to know how important the subject should be are what matter here.You have to stop and think what if you do not say what you think and you would probably end up telling yourself that it is my duty to convey the message which is what the society needs.

By mentioning the topic of the Social Cinema, she said that she is strongly in favour of this genre of filmmaking as she is living with the people around her towards whose daily issues she can not remain indifference.

The director of the film’ the Eternal Kids’ believes that people are dealing with different issues every day the things that they think should be remained unsaid. Nothing should be unsaid, but the way how we utter it is important. Each country has its own red line of taboos which should be respected.

She believes that first we face an issue in the society which automatically becomes our subject and after that we need to do research about it by studying more and more or to ask the psychologists or sociologists, here she referred to the topic of deaf people as a social subject for a film and said that in order to make the subject as tangible as possible I should live with the deaf people for a while, attend the deaf people classes, communicate with them and so on to choose the right character even.

At the end she asserted that in order to make a social film, the main factor is nothing but being real and authentic. Cinema means life, if you do not live it you can not convey it properly. You should select the right language for your film, the one which respects the norms of your society, a language of love.

The 34th edition of Fajr International Film Festival is being held from April 20th to April 25th in Charsou Cineplex, under the supervision of the well-known Iranian filmmaker, Mr. Reza Mirkarimi, who is also the Managing Director of Khaneh Cinema.